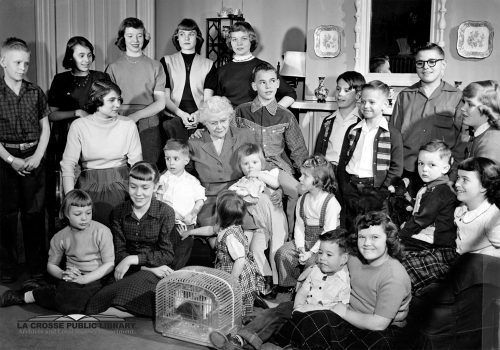 Information about the La Crosse Home For Children is in the Family & Children’s Center Records. It spans from 1888-1983, and includes several neat and old documents, such as a hand written “log of inmates” that dates from 1888-1915, and a hundreds of photographs that show daily life in the earlier days of the Home.  This is a very large collection, but this finding aid focuses just on the materials found in boxes 8, 9, and 10. These boxes have the most primary source materials on how the home functioned and the children who lived there. The sources paint a great picture of the home’s organization and the day-to-day life of the children who lived in it.

The La Crosse Home for Children was just that, a home for children. (It was on 11th Street.)  Meaning it was run as a regular home for a limited number of children. It is important to understand that these children were not up for adoption and the Home was not a treatment center for naughty or sick kids. It was simply a place where children could go when their parents were unable to care for them properly. A good number of the children eventually went back to their parents when they were able to care for them again. The children that were lucky enough to live at the Home went to school and church, and had chores just like any child. There was a matron of the house. (This is just a fancy title for the woman that lived in the house and made sure everyone was fed, clothed, and cared for.  She managed the household, much like a mom.)  The purpose of the Home was not just to give these children the things they needed to live, but to give them a happy childhood and to make sure they became good citizens.

Many of the articles in this finding aid talk about Miss Josephine Fletcher the home’s matron from 1929 to 1953. Fletcher was remembered by many of the children as their only mother-figure in life. She was renowned in the community and respected by many. She was a strong female role model and community member.

Folder 2 contains many newspaper clippings from 1888-1977. There are many articles with photographs, but they are in no specific order. The articles cover information on events and people associated with the Home.  For example, there’s a 1932 article, “La Crosse Children’s Home Provides Comfort For Many Unfortunates” that does a great job explaining how the Home functioned and all the work that went into maintaining it. There are a lot of articles about Miss Fletcher and her impact on the kids at the Home and in the community.

Folder 3 contains a handwritten ledger book of guests’ comings and goings. The back few pages list the matrons or housekeeper hired from 1888-1904. The book was amended in 1969 and lists the children admitted and discharged though 1977.

Folders 3-6 hold hundreds of photographs.  There are pictures of the Home and the staff and the children that lived there. There are photos of the children’s everyday life such as playing outdoors in the summer and winter, playing inside together, doing chores, and celebrating holidays. The photos really paint a picture of what it was like for these children: what their relationship with one another was like and what their relationship with Miss Fletcher and other staff members was like too. These four folders illustrate all of the information gathered in the other folders.

Folder 3 This is a small folder of correspondence with board members in the 1950s. The highlight however, is a few letters and notes between a girl that lived in the home and a board member. This includes her 1954 graduation announcement, a thank you letter for a graduation present, an update letter a few years later, and a birth announcement for her daughter.  (Miss Fletcher had to have been so proud!)