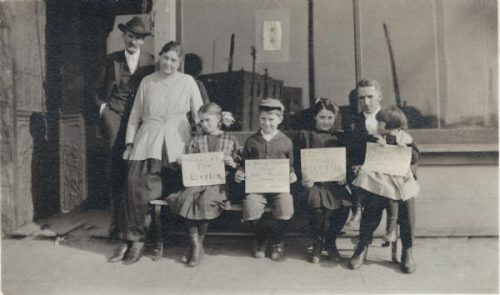 If you have ever wondered what life was like in Wisconsin during World War I, this Friendly Finding Aid is for you. It explores an exciting time in the United States’ history from the US perspective. This was a war unlike any war fought before, with effects that reached all the way into Wisconsin. This aid follows three years, 1917-1919, of newspaper articles from the Grant County Democrat. One of the great features of this collection is that all the papers you need are on microfilm. Here’s a chance to learn a new skill that all historians are familiar with. Looking through microfilm has advantages that most collections do not. Instead of searching your way through folders and struggling to read someone’s hand writing, you get to spend your time leisurely scrolling through typed newspapers that are easy to read.

This Friendly Finding Aid focuses on how World War I affected the home front in Muscoda (Mus-kuh-day), a small town in Wisconsin. Muscoda was a typical 1917 small town, therefore what went on there is likely comparable to what was happening across the country. Think of this as something historians call a “case study”: use of a single example to represent something larger. World War I had a wide range of impacts, but this FFA focuses on: food shortages, the Selective Service Act, home front support, and home front politics. Like all newspapers, the Grant County Democrat covers a wide range of topics, so while many of the articles pertain to World War I, a lot of them do not. Therefore, if the topics outlined above don’t interest you, there are others that certainly will.

It’s important to mention again that this collection of newspapers is on microfilm. Viewing microfilm is not very difficult but will require some new skills. The best way to learn how to use a microfilm reader is to have either the librarians or archivists teach you. Don’t be afraid to ask for help at any time, they know the machines well! The newspapers that you will be viewing carry an almost identical format throughout 1917 and 1918. The biggest news, especially local news, is focused on the front page. This is where a lot of information about the war is displayed. The rest of the paper includes various national and global news and weekly sections such as fictional stories and advertisements. The collection is extremely interesting and helpful for learning about the impact of World War I on this small town, but is also very intriguing just to see what small town life was like one hundred years ago. As you dive into this collection, try to imagine what these experiences would have been like if you’d lived in Muscoda. Don’t just consume the details; try to use your imagination to take a journey back in time!

To use the articles featured in this FFA do the following:

1. Find the newspaper’s date
2. Locate the page number or if there is no page number, count from the title page
3. Search for the article title
All of this information is provided below.

One of the topics that is related to World War I, and is frequently mentioned throughout the collection, is food shortages. Lifestyles had to change drastically because, to ensure that there would be enough food for the troops, people at home had to eat differently. For example, families had to limit important products such as flour and sugar!

With many farmers away at war, someone has to step up and keep the farms running. Read to find out how women and children were needed to help supply the soldiers with food.

Before you read this article, think of some ways that you would be able to help conserve food if you were asked to do so. The article is short, but very interesting. Did your prediction match what people were being asked to do?

Here you can read a great article about some of the latest technology…tractors! This is interesting because during this time period tractors were still not very common. As you read, take notes of what farmers with tractors were being asked to do.

Read this article to learn about a travel opportunity that helped with the home front effort.

Read about how the food shortages are affecting hotels, restaurants, and other eating places.

During the war, the Federal Government’s Food Administration set up regulations and gave advice for people on the home front. Read more about what they want citizens do to support the country properly.

In the 1910s, many families were canning their own produce. New orders from the Food Administration changed how people could can at home. Read to see what all Americans had to do differently.

Read about what citizens can do to further comply with the restrictions. There is a list of directions and guidelines on how to follow the rationing of certain foods in Wisconsin.

Throughout this collection you will also learn about the Selective Service Act, which is better known as the military draft. These articles talk about things such as where and how to sign up. The newspaper published soldier’s letters so that people could read first-hand accounts. Additionally, the papers talk about the impacts of missing many young men from the area. One of the biggest problems was a shortage of farm workers.

By the way if this topic interests you, you will also want to see the FFA titled, “The Selective Service during World War I.”

Here you can read about the process used to set up a draft law. This is a very interesting time because there had not been a military draft since the Civil War, so to have it return was a big deal.

The bill passed and is now a law! Read to see how it will be carried out and who will be enforcing it.

Read to learn about who had to enroll and the consequences of not enrolling.

This is another article that lays out the requirements men had to follow to enroll in the draft.
By the way, another cool article on this same page is, “Airplane Passes Muscoda.” Pay attention to how the people of Muscoda freak out!

In this part of the collection, the papers focus on home front support efforts for the war. Some of the support efforts included organizing Red Cross Chapters, as well as fund raising to send local newspapers to the soldiers away from home. Patriotism and the Red Cross were very hot topics throughout the whole war and many local people were very involved.

May 25, 1917: Page 1“Muscoda To Have Red Cross Chapter” and “Great Patriotic Demonstration at Muscoda Last Friday”

The first article encourages everyone to get involved in the Red Cross Chapter that will be starting in Muscoda soon. The front page features another article describing a great soldier send-off that took place in town.

This is a brief article, but after reading it I bet you can predict what will be happening in Muscoda.

The Red Cross is starting to take shape in Muscoda. Read about what steps they will be taking to keep growing.

This article features a long list of names. Imagine reading through the “Roll of Honor” for the Red Cross Society of Muscoda and not seeing your name on it. As the article says, “Don’t be a slacker.” Find out what citizens needed to do and where they needed to be so Muscoda doesn’t have any “slackers”!

Read about what could happen to the “slackers” mentioned in the previous article.

With Christmas around the corner see what citizens did to support their local Red Cross and at the same time get in the holiday spirit. By the way what is a Christmas Seal?

This short article describes some of the great work the Red Cross was doing.

On page one of this week’s paper you can read numerous interesting articles about what was going on in Muscoda to support the war. Choose two of the articles and see what can be learned.

The war has ended! Read the articles on the first page to get a sense of what it was like in Muscoda when news of the war’s end arrived. Remember, Muscoda is being used as a case study. What you read happening in Muscoda likely went on in small towns all over the U.S.

The Grant County Democrat also provides a great look at what different political leaders in the United States were doing to help support the war. By examining the local news headlines and experiences of local people, a lot of perspective can be gained on what life was like back then.

Read about the diplomatic relations being broken between Germany and the U.S. What does this mean for the future of U.S. involvement in WWI?

Read about a shocking and surprising twist in the war. Hint; It involves Germany, Japan, and Mexico working together against the U.S.

Read about the tense situation that has been ongoing with Germany’s U-Boats (submarines) and how the United States Government is responding.

This very interesting article talks about some things that are happening not too far from Muscoda.

In this article, you can read about the regulations President Wilson created for German Americans to follow. How are these Americans being treated differently?

If you’ve read the articles above, the big article on the front page on this date might not surprise you. Read about what’s ahead for the country.

This Army Captain says, “Wisconsin is not responding as it should.” Read what he says Wisconsin men need to do to show support for their country.

The first issue in November is a sad one because it brings news of the first soldier from Muscoda to die in the war effort.