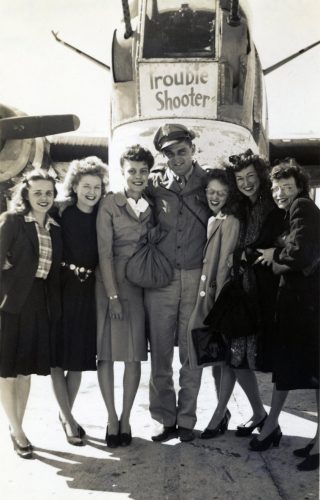 The real title of this collection is the Wisconsin Extension Homemakers Council (WEHC). From 1920-1960 the WEHC was a volunteer organization for women that organized social, educational, and community development activities.  The homemakers held frequent meetings, cooking lessons, and a range of other volunteer activities. They greatly valued volunteerism and education. These women worked with other organizations, such as the YMCA and the Children’s Home in La Crosse, and supported each other during the Great Depression and World War II by learning how to ration items and create budgets. This collection tells the stories of thirteen women – members of the WEHC –  who lived through the Great Depression, World War II, and the changing roles of women in society. This box includes women from places such as Onalaska, Holmen, and Sparta.

This is a primary source collection of oral history interviews of local women who were members of the WEHC. They are separated into fourteen folders. Each folder includes one interview of a Wisconsin woman. All of the interviews are typed, double spaced, and have very wide margins. Easy reading!  The interviews vary in length, but none are very long. The collection also includes two small books that contain pictures and recipes.

Folder 1 is the only folder that does not include an interview. This folder has five documents, including a pamphlet with pictures of the councils, a description of the WEHC, a guide that lists questions used in the interviews, an advertisement for the WEHC, and a project from one of the homemakers. This project is a mini-drama written by Betty Epstein, whose interview is found in Folder 5.

Folder 2 is the account of Helen Basset, a farmer’s wife. Basset described her community work with the council. For example, Basset was part of the Indian Mission. The mission worked to dress Native American children in “clean and suitable” clothing. This interview is 14 pages.

Folder 3 describes the life of Joanne Dach from Viroqua, Wisconsin.  Dach described charities that her chapter of the WEHC took part in. For example, she discussed food pantry donations and raising money for Haiti. Dach also described the challenges faced by women who attended college and worked full time jobs. This interview is 12 pages.

Folder 4 includes the story of Dott Dobbs, from Ontario, Wisconsin. Alongside her farm duties, Dobbs described the volunteer work and roles of the WEHC. The council assisted with the local 4-H club and supported community members in need. For example, her council provided aid to families that were impacted by house fires and unexpected deaths. This interview is 12 pages.

Folder 5 presents the story of Elisabeth (Betty) Epstein, from Jackson County. Unlike the other women in this collection, Epstein had a college degree. She described her work in the offices of army camps during World War II, and like Joanne Dach (folder 3), Epstein discussed gender roles. At one point Epstein described her community as a “man’s world” based on the opposition her council faced over railroad crossings. This interview is 12 pages.

Folder 6 is the narrative of Marion Fauska from Onalaska, Wisconsin. Fauska described her educational experiences attending a six week course in order to become a teacher. This folder also includes discussion about the Great Depression and World War II. Fauska provides the perspective of a young bride who could not afford a honeymoon and how she was encouraged to work due to a shortage of teachers during the war. This interview is 35 pages.

Folder 7 describes the life of Mae Flaig from Sparta, Wisconsin. She was part of the WEHC, a Leadership Development Committee, and the 4-H Club. Flaig experienced the economic challenges and the shifting gender roles of women during the Great Depression and World War II. For example, Flaig noted that women became increasingly interested in political activity. This interview is 59 pages.

Folder 8 contains the interview of Leila Halverson, a farmer from Holmen, Wisconsin. She discussed lessons given by the Homemakers Association. These lessons included dressmaking and food preservation. Halverson also described food substitutes and how even in birthday cakes sugar had to be rationed during World War II. This interview is 5 pages.

Folder 9 holds the account of Dolores Kenyon, from Sparta, Wisconsin. After her marriage in 1943, Kenyon’s husband left to fight in World War II. She described women’s shifting roles, such as non-domestic work and financial planning.  Kenyon was a volunteer with 4-H and the “Association for Retarded Citizens” (people with cognitive needs) in 1958.  Small portions of this interview are hand written. This interview is 16 pages.

Folder 10 holds the interview of Effie Knudson, from West Salem, Wisconsin. Knudson was involved with the YMCA and the Children’s Home in La Crosse.  Knudson described the Great Depression in an account about rationing sugar. She also discussed World War II and Victory Gardens. This interview is 16 pages.

Folder 11 contains the story of Josephine Sullivan Nixon. Nixon’s father served in the Civil War between 1863 and 1865, being discharged after President Abraham Lincoln was assassinated. The interview also gives an account of what life was like during the Great Depression, including meat rationing and flour substitutes. This interview is 31 pages.

Folder 12 belongs to Alice Nuttleman from Onalaska, Wisconsin. Nuttleman described the lessons that the council taught, such as bread making and sewing. She also described growing gardens, picking berries, and rationing sugar during the Great Depression. This interview is 12 pages.

Folder 13 describes the life of Margaret O’Rourke, a mother of twelve from Monroe, Wisconsin. She discussed sugar stamps, gas stamps and the difficulty of getting new tires during World War II. O’Rourke also described the Women’s Movement and gender roles during the war. For example, O’Rourke stated that men took part in more domestic duties in comparison to previous years. This interview is 39 pages.

Folder 14 contains an interview from Elsie Roberts, who discussed the Great Depression. Roberts described a shortage of money and food stamps. This interview is 14 pages.

Photos: The photos are also not listed in the official finding aid. The pamphlets and books hold pictures of young brides housekeeping, raising children, and numerous Homeowners Extension Committee pictures.