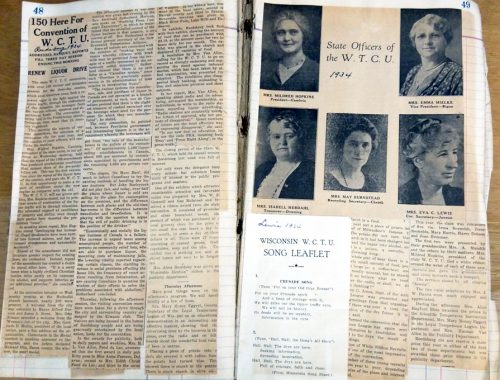 This collection is all contained in one cardboard box with the call number (M95-1). However, not everything in this box may be useful for your research. For this reason, this finding aid focuses on the newspaper articles collected and kept in the scrapbooks, and the manual for teaching temperance to children.

The Woman’s Christian Temperance Union (W.C.T.U.) was a national organization that formed to protest the use of alcohol in U.S. society. To do this they educated children about the negative effects of alcohol and also held street protests to make their voices heard. Also, it was the W.C.T.U. that led the movement for Women’s suffrage – voting rights – in an effort to strengthen their platform.

The W.C.T.U. had many state, county, and local groups. One prominent W.C.T.U. group in Wisconsin was in Sparta in Monroe County. This group collected local, state, and national articles about the W.C.T.U., which they kept in scrapbooks from 1909 through the 1920s.  (These scrapbooks cover an important time for the W.C.T.U. because that was when they  temporarily won their fight for temperance in the U.S. with the start of Prohibition in 1920.) The local group in Sparta also kept treasurer’s books, monthly meeting minutes, notebooks, and a few other random items like a manual for teaching temperance to children.

The newspaper articles collected are interesting because they connect a national organization’s larger movement for temperance to what a small rural community in Wisconsin was doing at the same time. Most of the local articles are editorials written by a local doctor – Spencer (Pen) Beebe – who worked with Sparta’s W.C.T.U. to help curb alcohol consumption, gambling, and violence in the community. His articles are usually aimed at the local police, the mayor of Sparta, or the community as a whole. He often quotes the harm of drunk driving accidents, violence, and death due to alcohol consumption.

Each item in this collection has its own number, ranging from 1 to 24. This is both wonderful, and until you see it for yourself, possibly confusing. But never fear, the numbers are written on each item. These numbers are written as (M95-1-1) to (M95-1-24). They are often written on the inside of the materials, on either front or back covers. Below you can see that the finding aid is organized by these call numbers. All of them start with “M95-1” because that is the box! Be aware that each item you use must be cited with its own item number.

It is important to note that the notebooks and “Records” books that contain meeting minutes and other notes could be useful for research if, for instance, you are looking at the rules and regulations local groups passed to make their movement successful. Beware, however, that these books are dense and written in cursive. This finding aid focuses on the newspaper articles collected and kept in the scrapbooks and the manual for teaching temperance to children.

Notice that this scrapbook began in the midst of Prohibition. It contains many local articles and tells the story of how prohibition affected a small rural Wisconsin community. This scrapbook goes through the 1930s, which means that the articles inside reflect the tensions at the national, state, and local levels over ending Prohibition. The language is often different than we see it today. For instance, people that are for temperance are often called “Drys,” and people that are for the legalization of alcohol are called “Wets.”

This scrapbook has a lot of Dr. Spencer’s articles. He used a “pen name” Beebe in them. Many of the articles argue that the police need to take their job prohibiting alcohol more seriously. There are also  articles about liquor raids in and near Sparta, the local ordinances passed after Prohibition ended in 1933, and many articles written about why women specifically should not consume alcohol. These articles about women often reflect the sexism in society at that time. One national-level article critiqued controversial comments Eleanor Roosevelt made about women and drinking.

This scrapbook was collected at the same time as (M95-1-2), but it has more national articles than the other. These articles focus more on the W.C.T.U. organization than the controversy of Prohibition.

Towards the end, there are clippings of pamphlets, poems, songs, and prayers that they collected.

(M95-1-7) – (M95-1-18): Secretary’s Books and Notebooks, 1879-1942
Each of these books contain notes made by secretaries throughout the years 1879-1942. They include: the group’s Constitution and By-Laws, lists of current members, lists of trustees, notes from state and national conferences that the group attended, and notes from their monthly meetings in Sparta.

These books are written in cursive and are frail with age.

(M95-1-19) – (M95-1-23): “Temperance Lesson Manual: For the Band of Hope and Loyal Temperance Lesson” booklets, 1896
There are four of these booklets, three of which are lesson manuals for children and the fourth is the teacher’s edition.

(M95-1-24): Envelope with various materials, 1937-1938
This envelope contains a booklet published by the national W.C.T.U. organization thanking local groups for their donations.  Wisconsin towns with W.C.T.U. chapters are listed on pages 18 and 19. The envelope also contains an award made out to the local Sparta group from the national W.C.T.U. organization congratulating them for their large donation. There is a letter-sized envelope addressed to Sparta’s W.C.T.U. president at the time, Miss Etta Tompkins, that has multiple things in it. Most notable, there is a newsletter and news release about a man scheduled to speak about the W.C.T.U. on a national radio station.

To learn more about their history at a national level, go to their website:
http://www.wctu.org/history.html