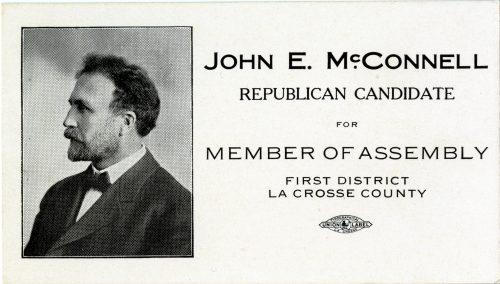 The John E. McConnell Papers is a small, but varied collection. It consists of 4 folders, filled with letters, speeches, news clippings, and even a couple of small pictures. Thankfully, the speeches and news clippings are typed and easy to read. On the flip side, the majority of the letters are written in cursive and require a bit of detective work to read—but don’t worry, you can do it! John E. McConnell was born in 1863 in Farmington—just outside of La Crosse. He spent his teenage years in West Salem before leaving to study law at the University of Wisconsin-Madison. From 1895-1899 McConnell served as La Crosse County District Attorney, and as a representative in the Wisconsin Legislature from 1909-1911. Throughout his life, McConnell was an active citizen—he was eager to learn from prominent political officials, important educators, and fellow lawyers. He was active in local politics, state politics, education, and law reform.

This FFA focuses on McConnell’s commitment to Progressive politics. Note that the FFA does not cover folder 4 and works backwards—first folder 3, then folder 2, and lastly folder 1. Folder 3 is filled with newspaper clippings that provide excellent insight into McConnell’s character. Start here because it will help you understand folders 2 and 3. Folder 2 is filled with typed, easy-to-read material. This background makes reading the cursive letters in folder 1 a breeze…or at least much easier.

The materials in the folders are not in a set order. Look for any dates or other eye-catching details on each piece to find specific documents. For example, in folder 2 there is a letter titled like this: July 1889, West Salem. City Attorney. This means that you will find the date, (July 1889) the city, (West Salem) and the title (City Attorney) on the first page near the top. Sometimes there are dates written in pencil on the top right-hand corner—look for these! Whenever there is a date written pencil, this FFA uses it to help you find specific documents.

This is a skinny folder, but it is full of information about John E. McConnell. Its clippings provide excellent insight into McConnell’s character. Read all of it! There are 4 total newspaper clippings: 3 different obituaries and a short article. Each obituary provides slightly different information, which gives insight into McConnell’s character. After reading this folder, would you have wanted to know John?

July 1889, West Salem. City Attorney
This speech focuses on the themes of state pride and patriotism. Read to see how McConnell thinks about Wisconsinites.

A legislative record is a list tracking the votes of legislative representatives. Find the quote from Charles William Eliot. He was a very prestigious man and the President of Harvard University. Eliot’s quote clearly shows McConnell’s Republican-Progressive stance.

In this speech, McConnell encourages the graduates to live a life dedicated to improving the human condition. Read this speech to find the high-minded ideals McConnell preached.
1912, Republican Standpoint (It’s in purple writing)

This campaign speech is meant to be persuasive. It gives a clear example of Republican-Progressive ideals. In it McConnell compares how progressives think in comparison to other politicians. Read to find the competing political groups McConnell references.

This clipping is a newspaper reprint of a speech McConnell gave at the Wisconsin Conference of Charities. (It is no surprise to find McConnell, a Progressive, involved in this conference.) It was one goal of the Progressives to help the poor through government or community-paid programs. Read to get a sense of the Progressive movement’s concern towards the needy and less fortunate.

This folder contains a wide variety of letters. Some are personal, dating all the way back to McConnell’s college years! There are only a few personal letters, but they reveal this budding idealistic character. The selected letters below are grouped based on topic. They are: business, government efficiency, personal research, and voting.

1870, Aug 18—Cyrus W. Field
Cyrus W. Field was a leading businessman in the telegraphing industry. He was part of the committee that laid the trans-Atlantic cable, creating a faster communication between the U.S. and England. How did McConnell understand the government’s role over this new style of communication?

These four letters are grouped together because they are all responses to questions McConnell asked. In each letter McConnell is curious to know about the efficiency of debates in the U.S. Senate and the House of Representatives. By Sending multiple letters, McConnell is trying to figure out if the government of the United States can be improved for the benefit of American citizens. Included in this group are letters from future President Benjamin Harrison and former (Civil War) Confederate Cabinet Official John H. Reagan! Read to find out what they say.

This group of three letters displays McConnell’s questioning nature. All of them were sent to distinguished professors from respected universities. He asks for book recommendations based on each professor’s specialized area. He also asks for their opinion on ways to improve the voting and law-making process. These letters are a clear example of Wisconsin Idea thinking! Why do you think McConnell went to these men with his questions?

McConnell sent letters to a wide range of people. Here he questions both U.S. Senators and leading African American educator, Booker T. Washington, about the right to vote. McConnell wants to know how test (reading or civics) would impact the voting process in the United States. What were the responses?