Letters from the Battlefield: Trowbridge Letters 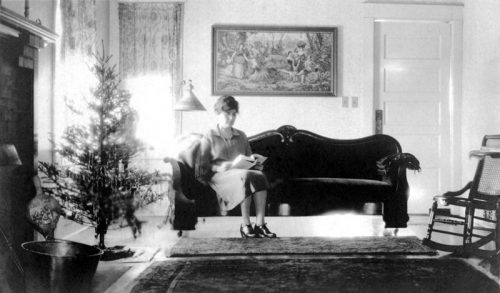 Miss Myrtle Trowbridge was a history professor at the La Crosse State Teachers College (LSTC), or what we know today as the University of Wisconsin-La Crosse. During World War II, Miss Trowbridge sent many letters and gifts to former LSTC students who were serving.  This collection includes the men’s letters to Miss Trowbridge written from battlefields in Europe, the Pacific, and bases throughout the U.S. Some letters were written after WWII, during U.S. military involvement in Korea and the Pacific Islands during the 1950s.  Most of these letters show that the men are in good spirits, however homesickness is not uncommon! The letters are organized by date and almost entirely handwritten in cursive, although some are typed. Sometimes a letter’s location may not be clear due to censorship.  For example, many list their location as “Somewhere in France.”

This collection consists of one box, with 9 folders organized by date. There almost 500 letters total! Most of the letters are from soldiers and only about 5 are from Dr. Trowbridge.  Also included in the collection is an index of names, dates, locations, and letter summaries.  The index is available online through the complete finding aid. It provides another way to prepare before visiting the ARC.  Take note however, reading a letter summary is not the same as reading the real letter.  It would not be correct to cite the summary as a primary source document.

Folder 1 contains letters from late 1941 and all of 1942. Most of the letters are from former students who are in basic training, and so are very optimistic about the war. For example, a letter from LeRoy Holm, who was at a training base in Georgia, stated that training was boring and that he couldn’t wait to be shipped overseas to fight the Germans.

Folder 2 contains letters from January to June 1943. In these letters many of Professor Trowbridge’s former students ask her about events back home and how the University is doing. This shows that there is quite a bit of homesickness among the soldiers. However, attitudes towards the war remain high. Also in the letters, many of the soldiers stress how important it is to write to a soldier. For example, after Private J.E. Allen of the United States Marine Corps got done with a grueling 4-month battle on a small Pacific island called Guadalcanal, he wrote, “I don’t think people in civilian life know the importance of writing to fellas in the service. It gives us all hope.” He goes on to write how he is a new man after that battle and he doesn’t think he will ever be the same.

Folder 3 contains letters from July through December 1943. Homesickness is a common theme with the former students. One of the students, LeRoy Holm, has just finished artillery school and is in New York City waiting to be deployed across the Atlantic. He stressed his concerns about not being home to help his sister start her college career and asks Miss Trowbridge to help her. On the other side of the United States, James F. Quinn of the United States Naval Seventh Amphibious Force is being shipped to Australia. He misses home cooked meals like the steak dinner Dr. Trowbridge made for him and a few of his friends before he left for basic training. His ship’s name is blacked out on the letter. This is an example of the military censorship going on during the war.

Folder 4 contains letters from January to June 1944. Miss Trowbridge fell ill over the winter of 1943-44 and many of her students show concern with her health and are happy to hear she is better. The war is really heating up at this time and many letters talk about the rising casualty rate. Corporal Ole Owens of the Office of Strategic Services in London, England writes about a friend shot down over occupied Europe and captured by the Germans. Owen is aware of the number of war casualties, and he believes that the general public is too optimistic about the war.

Folder 5 contains letters from July through September 1944.  There’s a lot going on in this folder.  The men write about their education in the service, their efforts trying to keep up with developments back in La Crosse, as well as the devastation of war. Many men are optimistic that the war will end soon because the “boys” in Europe and the Pacific are “doing the job.”  Meanwhile, soldiers stationed in the U.S. are eager to join the front lines. As a whole, the letters in this folder do a great job showing the range of experiences and points of view that existed during WWII.

Folder 6 contains letters from October through December 1944.  Some of the men talk about the upcoming Presidential election between Franklin D. Roosevelt and Thomas E. Dewey. They discuss the election’s impact on the war, as well as their attitudes towards the British and the Russians.  The upcoming holidays put a damper on the soldiers. The men in the Pacific complain of the heat and tell Miss Trowbridge how much they miss snow. Bill Keppel, a former LSTC student, is missing. Many of the men have feelings of homesickness.

Folder 7 contains letters from January through April 1945. In these letters there is a sense of confidence that Germany will fall soon, and the men in Europe look forward to “meeting” the Russians in Germany.  (Because the Russians invaded from one side, and the Americans from the other, meeting would signify that the allies had taken over all of Germany.)  However, there are concerns that the death of President Roosevelt will delay peace talks. The letters also discuss a memorial for La Crosse’s fallen soldiers back home.  One man even proposes the idea of building a football stadium with a memorial to honor the fallen.  (In 1948, Veterans Memorial Stadium was built, and it still stands today on campus!)

Folder 8 contains letters from May through December 1945.  As the war comes to an end censorship is reduced, and the men write more detailed letters about their location and past involvement in the war.  One man talks about being one of the first of the allies to reach Nanking, China, while just eight years earlier he was in Miss Trowbridge’s class learning about the Nanking Massacre.  Many men are still overseas but no longer in combat.  They express their desire to return home, although some are enjoying the “extended vacation at the government expense.” Some of the letters show a nervous optimism and uncertainty about their return.  After the war, many men talk about returning to college on the GI Bill.

Folder 9 contains a mix of letters from the late 1940s-early 1950s, during when the US enters the Korean Conflict.  Also included in this folder are undated letters and three letters from Miss Trowbridge herself.