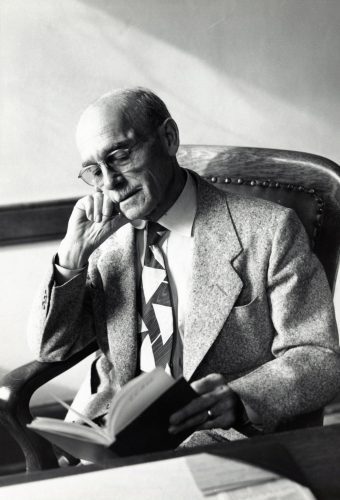 Orris “Bob” White, the man behind the collection of the Orris O. White Papers, 1919-1962, lived through two World Wars and the Great Depression. This finding aid will focus only on his experience during and after World War I (1914-1918), because it had a large and long-lasting impact on the rest of White’s life. White was a poet and English professor at La Crosse State Teacher’s College, (which later became UWL), from 1914-1952. His teaching career was interrupted when he left to serve in the American Expeditionary Forces (AEF) in France during World War I. The battlefields were not at all what White and his fellow soldiers were expecting. With hardly any training, the AEF was thrust into the first modern war, with machine guns and more advanced weapons than they could have ever imagined.

After the war, White returned home to his job as a professor, but he and many other veterans still could not make sense of their experiences. Because the soldiers felt misunderstood and different, they were called “The Lost Generation.” They carried not only visible scars, but invisible ones as well, like “shell shock,” or what is known today as PTSD. White and many other veterans turned to poetry and creative writing in order to better understand and explain what they’d experienced during the war. Because of this, they became known as soldier-poets. The soldier-poets tell their own personal history of World War I and the aftermath as the world moved into the modern era.

The Orris O. White collection is made up of two boxes. The first box includes various drafts of White’s poems. The second box also contains drafts of poems, as well as some of White’s creative stories and essays. Since there are multiple drafts and copies of each work scattered throughout the collection, this finding aid will indicate only where a particular document first appears. White and his fellow soldier-poets were rather straightforward with their experiences, because they wanted to explain the reality of war and their memories. The poems and stories are fairly easy to read and interpret. His essays are the most straightforward out of all his works. Nearly every document in the collection is typed, except for Box Two, Folder Four. All documents in that folder are handwritten.

A Note on Poetry and the Themes of the World War I Experience and its Aftermath: The soldier-poets aimed to make sense of their own war memories while they showed the public the reality of these experiences. The themes in these poems often vary between bitter feelings of loss felt during and after the war and disconnection to the modern world, to optimistic patriotism and national pride. Works like “War is Hell” and “Cootie” come straight from White’s experiences. However, an important thing to remember is that though these poems hold value as firsthand accounts of memories, soldier-poets often embellished their memories. It wasn’t on purpose, but the modern warfare of World War I rattled many of the soldier-poets. Even with embellishments, White still acts like a historian, writing down his own experiences and his own story through poetry. Poetry may not be a fact-filled history, but it is still a wonderful form of writing history!

This finding aid lists a selection of poem titles that all deal with World War I and its aftermath. There are many more poems included in the collection than are not listed here. Look at the “See Also” section for other topics White writes about.

Folder Two: Poems
“The World…CALLING or…crying”:  This is poem is a patriotic call to duty. Look for examples of White’s nationalism. He places the U.S. in a superior status above other countries, even during a time of uncertainty.

“The Unknown Soldier (of France)”:  This poem is in memory of Alan Seeger, another famous soldier-poet. It describes Americans getting ready for war, as well as the soldier’s accounts of the French peasants and the countryside. Many soldier-poets would fall in love with this Old World country, which led some to remain in Europe, or to travel often like White did.

Folder Seven: Poems
“The Freighter Cook”:  This poem is filled with gloomy emotions from the physical injuries leftover from World War I, and life in the U.S. before the Great Depression.

Folder Nine: Poems
“Then God Dropped for War”:  White writes that “flying (airplanes) was a means of war” and no longer a joy. This poem describes White’s negative response to the war.

“Tomorrow” (to all the Allied Forces):  Contrary to the title, this poem details White’s longing for “yesterday,” or the “good old days.” The poem actually reminds fellow soldiers and veterans “to live, not destroy.” It seems to be a direct response to the violence experienced during World War I, explaining White’s personal reflections and thoughts about his experiences and the aftermath he lived in.

Folder One: Essays
“Modern Ancient Mariner”:  This essay shows White’s confidence in America’s “comeback” after the war. He is hopeful for a return to the “good old days.” He explicitly states that his hope for the future lies in the students he teaches every day at La Crosse! (See Box Two: Folder Seven if you want to read more about the classes White taught).

“The Lost Battalion”:  This essay discusses White’s life as a veteran and a professor. He is concerned about the “lost youth,” or the Lost Generation, and states that education, literature, and the arts are the way to help this generation and the United States out of the post-war rut. As a college professor, this perspective makes sense. He puts his hope more in the individual and the arts, rather than industry and development.  Fun Find: This typed out essay has an edit in pencil, adding “world” between the “recent war.” World War I was simply called The Great War while it was actually happening. The “world” wasn’t added until later, and the “one” certainly wasn’t added until after World War II.

“After That—The Deluge”:  White tries to explain the struggle of his post-war experience. He feels that the United States is caught in a “national game of make-believe,” avoiding the violence and negative aftermath of the war.

“A Reverie (No. 2)”:  In describing violent Midwest blizzards, White mulls over the post-war experience and the odd feeling of “gain out of loss.”

“Reflecting on the Atmosphere of AEF”:  This story explains the specific scene of Armistice Day. It describes the French village he stayed in, as well as the French family he lived with during his time at the front. He explains the loss and disbelief he felt, even as messengers declared the Allied victory. Remember soldier-poets embellished their memories even while they tried to show the reality of war.

“War is Hell”:  This seems to be another one of White’s memories. This work tells the story of the soldier’s French friend Pierrot who helped the Allies by discovering and relaying important information. The scene actually takes place after the war was officially over, but raiders still attack the French village overnight.

“Cootie”:  Cootie is a French woman who runs the Alley-way Café, an improvised cafeteria for the Allied troops stationed in her French village. White describes the reactions of the soldiers and Cootie to recent battles.  Fun Find: Before this story, there is a handwritten apology from White. He apologizes for the actions portrayed in the story. White says he was not himself during the “game of war,” and apologizes for this part of himself that committed such violence.

Folder Three: Poems and Prose
“A Bald-Headed Bachelor Looks at Himself in the Mirror”:  This is a fictional story, but it directly references “no man’s land” and trench warfare. This story also explains war injuries, referring to them as “noble wounds.”

Folder Five: Poems
“Bombardier”:  This poem shows White’s support for the air force. It describes the feeling of flight and the heroic deeds of pilots.

Folder Seven: Poems and Prose
“Creed”:  This poem describes the bitter victory many soldiers felt post-war. Although the Allies won the war, the soldier-poets lament the violence they experienced and committed. They fear these memories will haunt them for the rest of their lives.

This finding aid focuses on World War I, as it is what White wrote the most about. But he also lived through the Great Depression and World War II. Some poems and essays reflected his opinions and everyday experiences of that world as well. He also had a love of nature, which he wrote many poems about.

Nature
• Box One: Folders Two, Three, Four, Seven, and Eleven all include poems that describe the nature around the La Crosse and Coulee Region. Folder Three actually includes “The Bluffs and Coulees of Western Wisconsin,” which is a pamphlet of related poems all about La Crosse, the Bluffs, and the Mississippi River. Many also describe White’s preference for nature against the looming modern age of industry.
• Box Two: Folders One, Two, Four, Five, and Seven include more poems about La Crosse, as well as some of White’s poems about the desert in Arizona, and more about White’s position against industry.