The Selective Service During World War I 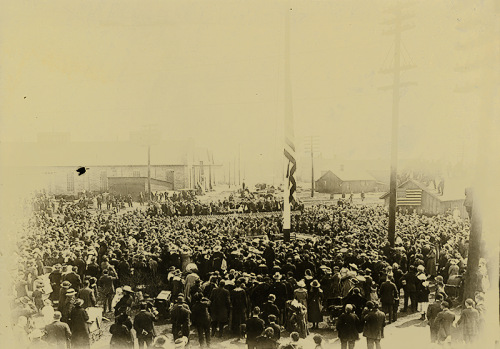 The idea that men have to register for the draft when they turn eighteen is a pretty familiar concept to us in the 21st century, but the draft has not always existed. One major change that occurred in preparation for World War I was the switch from a volunteer and local militia-based army to a drafted army. The Selective Service Act of 1917 created a frontline of potential soldiers, men who could be quickly mobilized in twentieth-century conflict. There were three major draft registration dates, days where all the men within a certain age range would report to an office and fill in their information. The first took place on June 5, 1917, the second in June of 1918, and a third, from which a good majority of the papers in this collection are from, on September 12, 1918. The original draft registration was for men aged 21-30, although exemptions were given for college students and men in specialized careers that provided much-needed services for the war effort on the home front.

This collection is mostly handwritten lists and documents. There are very few problems in reading the cursive, however, because it was meant to be read. The collection is contained within one box with approximately fifteen folders inside. Each folder has its own title, which will be in blue below. The documents to find within each folder are in bold. If you follow the folders and documents provided below, you will discover the requirements for being a soldier, the number of men who had to register in Grant County, and the different ways that men avoided registration, the draft, and the war. It is important to keep in mind that while this collection represents a small section of the state, and even the country, this was happening across Wisconsin as well as the entire United States.

The first really cool document in this collection is in the last folder. Find the newspaper with the title “Selective Service Register.” It’s pretty clear which item this is, but be careful, it’s over one hundred years old, and could rip. Unfold it and turn to the back cover, on which is a blown up version of the draft registration card that everyone had to fill out when they went to the draft office. This is a prime example of the information that government and military services needed from registrants.

This is a smaller sheet of paper that has columns of numbers of it, which show the height and weight requirements that men had to meet to be considered eligible for military service. It was used to make sure only physically healthy men were being inducted into the armed forces. As an example, think of Steve Rogers before he became Captain America. He wouldn’t have fit all the basic requirements to even get a physical examination. (Would you qualify?) Registrants also had to list physical ailments they had. Anything that would slow a soldier down in a war zone almost immediately disqualified them for military service.

This folder has of lists of men, mainly 21 to about 34 years old, with a few exceptions. Focus on the men who were scheduled for examination between February 12th and February 20th. This is a stack of 18 pages, and the first page is stapled to a little piece of scratch paper, where someone wrote out and added up the number of people they scheduled. This is in cursive, but whoever wrote it had clear penmanship, so there are only a few words that are hard to read. The lists of men are in alphabetical order by last name and serial number, which makes it very easy to go through and look for someone. (To find someone, you could search by name or serial number.) Be sure to notice that there are two columns of names on each page. With this, you can try to match up the names on this list with the names in the Wisconsin’s Gold Star List, a book that recorded the men who died during the war. More information on this book is in the “See Also,” below.

Lists of Men Prepared by Local Board

This is a photograph and an accompanying list of names. It’s kind of cool to put faces to what some of the people registering for the draft would have looked like. Consider two things while looking at these faces: first, the age of those pictured, and second, the fact that many of the men in this picture likely would have gotten exemptions due to being enrolled in higher education.

This is a four page-long packet, about 3/4th the size of a normal sheet of paper, and held together by a gold clasp. It is from November 30, 1918. You’ll notice this is from after the war was over. This is a consolidation of all the information that the draft board received from registrants during the three draft registration dates. This packet summarizes all of the men who registered for the draft in Grant County between June 5, 1917, and September 12, 1918. The last page, in particular, gives the totals for everyone under each of the registration classes. These registration classes were how draft officers knew who could serve in the armed forces, and who was, for some reason, ineligible. Ineligibility could come from a number of things such as, illness, specialized jobs or skill sets, college attendance, being a non-combative conscientious objector, having a dependent family member (or members), among other things.

This is from June 5, 1918 and is a list of everyone in Grant County who registered on that day because they were now 21. This is just an interesting document because it lists so many names. Do you recognize any of them?

This is a packet of horizontally written light grey papers that have a list of all the towns in Grant County and how many people of each age registered from each town. Notice how many men were registering, even on just this date. Note the towns listed and the men from each town. Do you think any of these men were related? And if so, how?

The last thing to look at in this folder is the bunch of papers that record those who didn’t show up for physical examinations, so are considered deserters or draft-dodgers. These papers are from January 30, 1919, a few months after the war ended. This is another consolidation of the draft registration information that was collected during the time that the draft board was open. Take note of the interesting reasons, or reasons the draft office came up with, that men didn’t appear for registration, examinations, or their draft call. One especially interesting one, on page 3 of this packet, is about Dewey E. Hudson who was said to have been sent to state prison after registration, escaped from jail before the mailing of the draft questionnaire, was never located, and possibly had enlisted in the U.S. army elsewhere, and was likely stationed in the Canal Zone.

If you’re interested, there is a book that compiles all of the men from Wisconsin who died during World War I. The book is titled Wisconsin’s Gold Star List; Soldiers, Sailors, Marines, and Nurses from the Badger State who Died in the Federal Service During the World War. (The call number is D570.85.W6 G7. You can ask for this book at any archives, using the title or the call number.) It was put together by John Goadby Gregory in 1925, and there should be a copy at any archives you go to in Wisconsin. There is most certainly one in Platteville, where this collection is housed. If you’re feeling inspired, there’s a number of men listed in this particular collection, in the folder, “Lists of men scheduled for examinations, February-November 1918,” that can be found in the part of this book that covers Grant County.

By the way, if you have found family members (or even an interesting person) in this collection you’re doing genealogical research. Selective Service records are a great starting point because of the draft’s comprehensive registration process. The majority of men born between 1875 and 1952 (the approximate cut off age for Vietnam War draftees) had their information recorded by the Selective Services in a similar way to the documents in this collection. Using the names and serial numbers found in this collection, one can find the actual draft registration cards and more, and begin a deeper search into ancestors’ lives.