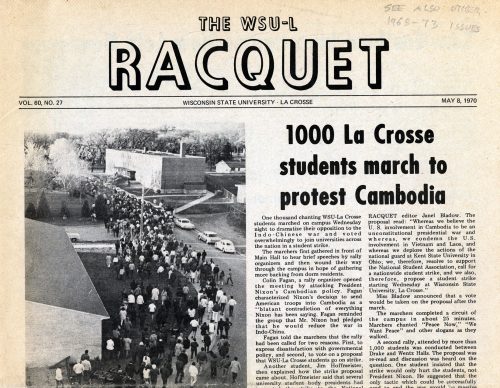 The documents in each folder have to do with student protests mostly during the 1960s and 1970s, although there are also some articles from the 1990s and 2000s. These protests were generally about the Vietnam War, the Iraq War, the environment, and other issues important to students.

PLEASE NOTE: In many of the articles from the 1960s and 1970s, UW-La Crosse was called Wisconsin State University-La Crosse (WSU) or La Crosse University (LCU).

PLEASE NOTE: The citation for each document in the vertical file depends on the type of document it is. For example, a newspaper article would be cited differently than a memo or a protest sign. Go to the Chicago Manual of Style, or ask a librarian or teacher for help.

Demonstrations File #1 has documents that cover 1966-2009. There are newspaper articles about bomb threats on the La Crosse campus, student protests against the Vietnam War and U.S involvement in Cambodia, reaction to student protests, rallies against coal burning, protests against U.S. involvement in Iraq, use of tear gas and force on student protestors, and violence against women. This file also contains UWL student-made flyers, and  documents between the university and the government in which officials discuss what to do about campus demonstrations and bomb threats.

Demonstrations File #2 is very similar to File #1 except it’s thicker.  This file has mostly government reports that discuss problems with student protests in La Crosse, Wisconsin, and the U.S. There are also newspaper articles specifically about La Crosse University students causing trouble. There are a few articles from UW-Madison’s liberal newspaper, The Daily Cardinal, about student protests. There is a court document on an incident that took place at UW-Oshkosh involving the Black Student Union’s civil rights protests. Some students were suspended for disruption and destruction of property.

Demonstrations File #3 is similar to the other two files, however it has mostly student-made flyers that announce demonstration events on La Crosse’s campus. There are also many documents and flyers that mention the draft and the Vietnam War, as well as anti-war happenings at Kent State (in Ohio) and Berkeley (in California).

Here, you can search keywords and articles from The Racquet (UW-L’s campus newspaper).