Soldiers Suffering During the Civil War 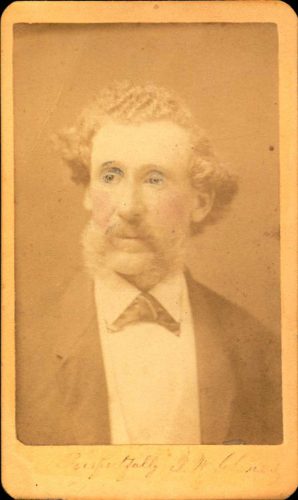 The Glines-James Family Papers collection is a great way to learn about what life was like in Wisconsin before, during, and after the Civil War. It provides insight about the past mainly through personal letters between family members. The collection also contains newspaper clippings and various written works by family members. Altogether these documents portray the Glines-James family’s day-to-day life, their struggles as new residents of Wisconsin, and life during the Civil War.

This friendly finding aid will focus particularly on the time period during the Civil War. Specifically, it will examine the struggles—whether they be war or family related—of a Union soldier. It will also briefly analyze the influence of the Civil War on the soldiers’ family members, especially relationships and financial needs. When men went off to war, the families had to take on their work, such as farm chores and odd jobs. Also, the distance and threat of the unknown strained relationships because, back then, people’s main form of communication was through written letters, which took time to be sent back and forth. Not many people think about how families suffered during the Civil War. Thanks to Geneva James, we have a firsthand account of these struggles.

Note: Because there are so many people in the Glines-James family, the collection can sometimes be confusing. Below is a list of one branch of the family. It contains members of the family that you will most likely encounter in this specific portion of the collection. You may notice that some of the children have two last names, with one of the names written in parenthesis. This indicates a woman who married. The name in parenthesis is the woman’s maiden name, or the last name given her at birth, while the name not in parenthesis is her married last name.

In its entirety, this collection contains three boxes and one oversized folder. This Friendly Finding Aid will focus on letters from box 1 and folders 1 and 3 of the collection. These folders contain information on weather and travelling, soldier training, health issues, injury and death, family-related struggles, fear of the unknown, and family members’ struggles during war. The letters are arranged by their author—not chronologically. Letters from each family member listed in the family tree above can be found in both folders 1 and 3. Each letter hits a range of topics, so even though certain letters are highlighted below don’t be afraid to read more!

Note: When reading these letters, keep in mind who the author is writing to. They may be more inclined to hold back the truth or vice versa, depending on who gets the letter. For example, is the letter to Mom or a brother? Think about what is written and what is not written!

How to Find Documents

1. Go to the folder number listed (in sections below).

2. Look for the date on the letter. Most of the dates will be at the top of the document, but for a few you may have to hunt a little.

Now you know how to find what you need, and you can search to your heart’s content!

During this time soldiers travelled long distances by foot. They were forced to endure extreme weather conditions, poor sleeping conditions, and soreness—both from walking and carrying their supplies with them. Learn about the effects of weather and travelling on soldiers’ physical and mental health in letters written by Edward Pendleton Glines. Here are two to get started!

Military training was grueling and could sometimes be demoralizing to soldiers. For example, soldiers hiked for many days and hundreds of miles. Then, once they had arrived at their destination, soldiers were put through rigorous twice daily training sessions. Evidence of the difficulties of military training can be found in letters written by Edward Pendleton Glines. Be sure to read:

Disease and illness affected both soldiers and their family members. Health issues in the field and at home were a cause for worry because medicine was not as developed as it is today. Illnesses spread quickly and were especially alarming on military bases because soldiers lived in such close proximity to one another. To see how health issues affected soldiers and their families, read letters written by Edward Pendleton Glines, Mary Ann Ware Glines, Charles Glines, and Mary Ann’s sister, Elizabeth. To begin, read:

Injury and death were (and still are) two of the most recognized stressors for soldiers. Not only did soldiers have to worry about injuring themselves or being killed, they also had to worry about their fellow soldiers being injured or killed. To learn about the hardships soldiers encountered when facing injury and death, read letters written by Edward Pendleton Glines (especially those he wrote to his father, Isaac). Be sure to read:

Soldiers were greatly affected by the time they had to spend away from their family. Not only did they miss out on family events, but they had to decide what to share and what to keep to themselves. They wanted to inform their loved ones, but also did not want to cause them too much worry. Read letters written by Edward Pendleton Glines (especially those he wrote to his mother, Mary Ann) to learn more about this. Be sure to read:

**Note: Compare Edward P. Glines’ writing to his mother and his father. Does he reveal more about his struggles (or types of struggles) to one of his parents? Is he more concerned with protecting one parent than the other?

Keep in mind that there was no way for soldiers to know how long the fighting would last, or if they would even return home. Each day soldiers feared they might die. This sense of not knowing and also not being able to control whether they lived or died deeply affected them both during and after the war. This concern is evident in letters written by Edward Pendleton (especially those written to his siblings and father). Be sure to read:

**Note: Pay close attention to Edward P. Glines’ attitude. Look for highs and lows and consider what may have caused them. Do this to better understand the emotional rollercoaster a soldier experiences.

Not only is war difficult for the soldiers, but it also takes a toll on their family members—both emotionally and financially. For poorer families every member plays a part providing for the household. If one member is gone to war those at home must take on more responsibility and chores. War is also extremely tough on family relationships. Not being able to see someone is disheartening, and people tend to assume the worst when they have gone for a long time without news. For evidence of this, read letters written to Edward Pendleton Glines from his siblings and parents. Make sure to read: