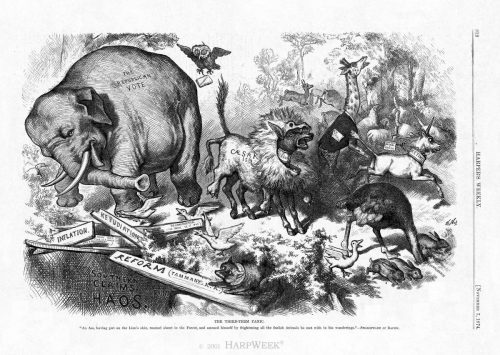 Samuel D. Hastings was a lawyer, real-estate broker, and merchant who lived in La Crosse during the mid 1800s. During his time in La Crosse, Hastings dealt mostly with buying and selling land in the general area (La Crosse County, Trempealeau County and parts of Winona), but he also had strong political ties and eventually became Wisconsin State Treasurer.

This collection is made up of one box with a letter book and five folders full of letters written (in cursive) to and from Samuel D. Hastings.  They are about Hastings’ business and political activities, and date from 1838 to 1872. Each of the five folders varies in length but on average there are somewhere between 100 and 150 letters in each!  This finding aid, however, covers only the letter book and folder 1, and highlights only a couple of pages and letters from each.  That’s because most of the correspondence is about land transactions and real estate deals, however there are some letters that focus on the Civil War, abolition, and the creation of the Republican Party. There may be only a few gems in this collection, but they shine brightly!

The letter book has page numbers so finding specific letters is not difficult, however the letters in folder one do not.  They are identified by year, but take this as fair warning, you may still have to hunt!

This is a bound book, which holds around 400 pages (it is the largest piece of this collection), and is filled mostly with land transaction receipts and correspondence between Samuel D. Hasting and Francis Newland spanning a number of decades. Only the first 150 pages of the book were reviewed for this Aid, but in those pages there are a few worth noting:  Page 49, relates to the Union; Page 68 covers a Republican Party conference that was held in Madison; and Page 91 is about the Trempealeau County militia. If these gems entice you, keep reading, there may be more!

This folder contains letters from the year 1838 until May of 1856. The early letters in this folder deal with Samuel D. Hastings while he was secretary for the Union Anti-Slavery Society based in Philadelphia. Letters dated in 1838 talk about the society helping to free 500,000 slaves calling it “the greatest day on Earth since the death of Christ.” Another letter from that same year describes the role Philadelphia churches played in the “fight for freedom” for all men.  Besides these two letters, there are two more that discuss the Republican Party.  One dated 1855, speaks about a branch of the part forming in New York State, and another, dated 1856 reference Geneva Wisconsin.  The writer is very impressed with the party’s activities there, calling it “the self of true republicanism.”