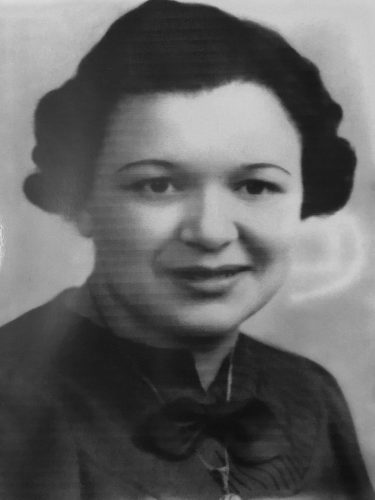 Robbie Moss was an African American woman that lived in La Crosse from the 1930s through to her death in 2004. She was born in Mississippi in 1912 and moved to La Crosse when she married Orby Moss, the grandson of Zacharias Louis Moss, one of the first Black American settlers in La Crosse.  He settled here in 1852 and opened a barbershop. (This was just two years after La Crosse became established as a town, making the Moss family one of La Crosse’s pioneer families.)

Robbie was interviewed by Dr. Gretchen Lockett, a professor at UW- La Crosse, who is also African American. In the interview, Moss and Lockett talk about their experiences being African American in La Crosse between the early 1940s and 1982. They also cover major national and local events, such as WWII, workers’ strikes, and the Muriel Boatlift.  Prejudice – theirs and others – and segregation is addressed throughout.  There is also a fair amount of discussion about the relationship between La Crosse’s African American and Native American communities.  Overall, this interview is a great window into what life was like as a minority in a small Midwestern city during the middle part of the 20th century.  Although Moss and Lockett are the main “voices” in this oral history, there are others who speak as well, and everyone in the room has different experiences and different opinions about the racism they faced.

This oral history interview was recorded in 1982. It consists of two cassette tapes, each an hour long, but there is also a written transcript of the interview, which is 68 pages long.

There are many people talking in this interview. The interviewers are Dr. Gretchen Lockett, a professor at UWL, and an unidentified student. Robbie Moss is the primary person being interviewed, however her granddaughter and at least three other people are in the room as well, and they all talk. Because of this, the transcript can get confusing. Many times it lists people as, “GUEST,” “GUEST 2,” or “?????.” The person who typed the transcript often mixed up who was speaking. For this reason, it is highly recommended that you listen to the interview while you read the transcript. As you listen, you will begin to recognize the voices, making the whole interview much clearer.

Pages 1-7 are the part of the interview where Lockett and Moss talk about the Moss family and Robbie’s childhood. In addition, she talks about her experience being one of the few African Americans in La Crosse. In particular she remembers being refused service at places of business, segregation signs during World War II, Black soldiers at Fort McCoy (previously named Camp McCoy), and a La Crosse woman that was involved with in the National Association for the Advancement of Colored People (NAACP).  Especially interesting is the part where Moss reflects upon her own prejudices against Native Americans.

On pages 10-22 the other people in the room begin to talk more. They share common experiences of racial discrimination. In particular, Moss remembers Black American soldiers being refused service in downtown La Crosse, which she compares with her own experience being turned away at a La Crosse drugstore. In addition, this section covers a number of very important local and national events.  For example, Moss remembers the time during the 1980s when there were Cubans (many who were Black) in La Crosse due to the Mariel Boatlift. She remembers community backlash against Black Americans and Native Americans, and the La Crosse Telephone Company Strike of 1977.  When the workers went on strike, the company responded by finding replacements – Black and white – from the South willing to come up and work. Robbie shares her theories of La Crosse’s prejudices at this time.

A very interesting part of this interview is the conversation about Black organizations in La Crosse, like the NAACP, the Black church in La Crosse, and Black settlements around the region, such as the one near Hillsboro.  Nathan Smith is mentioned.  He was a prominent Black American in La Crosse in the late 1800s and early 1900s.

Pages 23-37 are all about racial attitudes and behavior in La Crosse and the Midwest.  The group discusses their personal experiences and theories about race in La Crosse, but also the difference between racism in the Midwest and racism in the South. (This subject is especially interesting because for many white Midwesterners, northern racism is a subject they may have never considered.  Here you get to learn about it by someone who directly experienced it.) They also talk some more about the racism Cubans faced in La Crosse in 1982, why they could not find jobs, and how the media reported about them.

On pages 37-50 Robbie Moss’s granddaughter shares her views and experiences as a Black American college students in La Crosse (mostly Viterbo, where she went to school). This turns into a discussion about religion and racism in the community.  Moss weighs in as well, telling what it was like for her children in terms of school, dating, going to events like prom, and all the other typical things children do in general. This section also returns to the subject of the hardships for women of color, and what it was like to live in such a prominently white community. Robbie Moss’s memories of what it was like when famous Black musicians came to La Crosse is really interesting!  (By the way, Duke Ellington, Peaches & Herb, Stevie Wonder, The Temptations, and Louie Armstrong – whom Robbie and her son met – all came to La Crosse during Moss’s lifetime.)

Pages 50-66 return to the subject of Black churches in La Crosse and employment challenges. Moss remembered not being able to get a job at Trane Company and the National Gauge and Register Company. They voice their different theories on the subject of jobs.