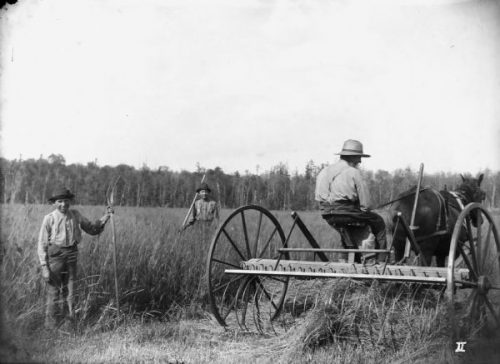 Orlando S. Jones was a pretty interesting guy. He was a Wisconsin farmer that lived his life on what, at the time, was the very edge of the United States border! Through his diary, we can read all about his regular tasks and his day-to-day life on the frontier. Orlando’s Diary is actually two separate diaries. The first details his life from 1852-1873, and the second one has entries from 1873-1888. Use these to explore the routine life of a pioneer farmer trying to make ends meet in the newly formed state of Wisconsin. (Wisconsin became a state in 1848, a mere 4 years before the first entry!)

Orlando’s diary can be used in tons of different ways, because it shows many different things going on in the 19th century. For example, along with being a farmer, Orlando also worked as a school teacher. Therefore, you can discover for yourself what duties and tasks a teacher performed almost two-hundred years ago! This is just one idea for ways that Orlando’s diary can be used among a variety of others only limited by your own shrewdness and eye for ideas.

This finding aid will focus on the importance of routine in order to maintain and thrive as a pioneer farmer in Southwest Wisconsin. By following it you will find examples of joy, sadness, money problems, and most commonly, the farming routine of Orlando S. Jones. Consider it an adventure into Orlando’s life from 1852-1858!

• Orlando will be referred to by his first name throughout this finding aid because it’s just way more fun to use than his last name.

• Orlando’s handwriting may be hard to read at first, but once you get used to how he writes, it gets really easy to read.

Orlando S. Jones was a farmer, school teacher, and town clerk somewhere around Grant County. Orlando kept a hand-written diary of his regular life in a bound book, from 1852 until 1888, with footnotes that go all the way up to 1903. The diary logs the various chores, work, expenditures, and trips that he would go on every single day. Orlando also gave a brief description of what the weather was like at the end of each daily entry in the diary.

The footnotes range from interesting to mundane, but they are always worth looking at! For example, in some months Orlando details the type, and amount of various crops he harvested. In other months he tallies up the total of how much money he made, compared to how much money he spent, over the course of the month. Also in the footnotes Orlando gives details on the personal things that have happened. For example, When Orlando’s father died, the daily entry merely states “Father died. 2 ½ A.M.” however, at the bottom Orlando details HOW exactly his father died (diabetes). It’s important to note that any daily entry that has a footnote at the bottom of the page associated with it was a big deal to Orlando.

You’ll start to notice a pattern as you read farther into the years of Orlando’s life and realize that certain crops were prepped, planted, harvested and cleaned on a rotating basis, depending on the month, as well as the weather. The same was true with livestock. This pattern is the key to Orlando’s survival on the frontier that is Southwest Wisconsin, and is also the reason that this diary is such a great historical tool!

Every page is headed with the year and covers one complete month from start to finish. Each month is then broken down into a line per day. There is space at the bottom of the page for footnotes.

Quite a few days or even weeks in a row have one recurring entry. For example, one day will simply say “Chores,” followed by 5 days of nothing but quotation marks indicating that those days were also just full of “chores” as well.

Important note: In the next two sections, Orlando’s life will first be broken down into a chronological list of important or interesting diary entries from January 1852 through December of 1858, followed by the routine that makes up his everyday life. Each bullet point in the FFA will have questions underneath that should be considered when looking through Orlando’s diary.

Second Important Note: The reason this portion of the FFA starts with the interesting events is because they’re just a little more… well interesting than Orlando’s daily routine. However, keep in mind that the routine IS interesting because it shows how people survived on the frontier in the mid-1800s.

Reminder: This section goes chronologically through the interesting events that happened in Orlando’s life from 1852 through 1858. If you’re having trouble finding the specific events, refer to the first point of the reading guide.

What does Orlando do in June of this year in his position as a town clerk?

March 11, 1856: “Went to Platteville to have Daguerreotypes taken.”

August: What is Orlando focused on this month?

October-December 1858: Orlando is working on building a sawmill

Reminder: This section is broken up into the 12 months of the year. Each month contains bullet points of the routine work done during that specific month in any given year. Read the questions under each bullet point and try to find the answers for them in Orlando’s Diary. Be sure to pay attention to the variety of work Orlando must do to survive.

Looks specifically at February 1854 and 1855, where is Orlando spending a lot of his time?

Sawmill work as well as sawing and chopping wood for personal use.

Hauling and cleaning corn and grains