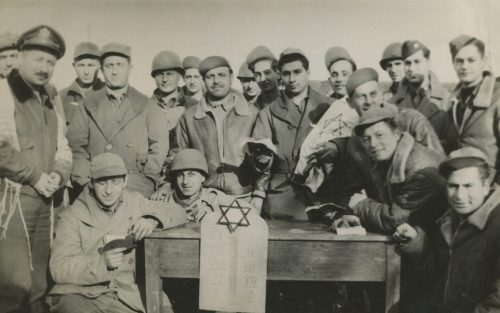 The Sons of Abraham Congregation was a local Jewish community that began in La Crosse in the 1900s and continued until the 1980s. The entire collection is 2 boxes, with most of the folders filled with bank and cash flow records. This FFA, however, will explore only the Dedication Booklet section (box 2 folder 7) and the Miscellaneous Papers section (box 2 folder 1).

The Dedication booklet is filled with information about the history of La Crosse’s Jewish community, the overarching message of B’nai B’rith (Buh-NAY Buh-REETH), a national Jewish service organization, and, most importantly, the role American Jews played in World War II. The booklet is divided into sections covering topics such as blessings, the history of the local Jewish community in La Crosse, and even the building plans of the synagogue; but, all sections eventually connect back to war efforts—at home and abroad—which will be the main point of discussion throughout this FFA.

The Dedication booklet features several separate documents within its 80 total pages. These documents include messages from local Rabbis and religious leaders, information about building the synagogue, and the history of the Jewish community in La Crosse. The pages below are out of order because the history portion gives a solid background for the rest of the booklet. The pages with advertisements from local businesses are not listed. These are fun to look at but are not important to the narrative developed below.

The first page of the “History of La Crosse Jewish Community to 1948” is an in-depth description of how Jews came to La Crosse and settled in this area beginning in 1845. Look for the names of the first Jews to come to the La Crosse area and the impact that they made on the rest of the community. Also, explore the evolution of the religion in the area—specifically how the name of the congregation changes in reaction to a different group of people coming to the region. Another interesting thing to keep an eye out for is the gender of the leaders, keep this in mind as you read the rest of the booklet. Pages 32 and 33 describe the migration of Orthodox Jews into the area and the role of Jews in WWII. Be on the lookout for the types of support provided by Jewish women and Jewish men both locally and abroad. How were they honored for their work?

“The History of B’nai B’rith” discusses the moral code that the Sons of Abraham follow. B’nai B’rith, which means “Sons of the Covenant” or “Children of the Covenant,” is the world’s oldest Jewish service organization, dedicated to the relief and empowerment of Jewish communities around the world. As you read, take note of what their code means and how it was practiced. B’nai B’rith is responsible for the creation of many different committees dedicated to combating all forms of anti-Semitism, prejudice against Jews specifically. Look for information about the Anti-Defamation League. To further understand the code mentioned previously, look for who it was created by and what they do.

The last document in the collection is “The Jewish Women’s League.” The league was formed by Jewish women in order to be active in this time of crisis. The document discusses how the league would provide “kosher goodies” to soldiers stationed at nearby Fort McCoy. After reading, think about what the author mentions in terms of post-war efforts from the women of the league.

This document is titled “We Dedicate Our Synagogue.” It was written by Rabbi Morris Gordon, who was the Rabbi for a synagogue in Minneapolis before he came to La Crosse. He discusses how the goal for the Sons of Abraham should be to create a “House of Learning.” Look for how Rabbi Gordon emphasizes what the synagogue will need to do to become a modern Jewish society. Hint: The time period is the late 1940s. What major event just happened during this time period?

The next page has another message from a Rabbi. Titled “Building a House of God for the Future of Israel” it was written by Rabbi Abraham H. Album. It tells a story of Babylonians raiding the city of Jerusalem. Look for the connection made between the Kohanim (Jewish Priests) and the current state of the European Jewish community. Also look for who the author suggests should lead the way for the world’s Jewish community.

The message on page 15 is from the Bishop of the Catholic Church in La Crosse. He is very progressive when it comes to the unification of the two churches. He praises the Jewish community by saying that the construction of their synagogue has led to not only the “brightening” of the La Crosse community, but the country as well. Look for how the Bishop criticizes the recent Supreme Court ruling dealing with public schools. Think about what this criticism means in terms of the modernization of the Jewish community in La Crosse. Think back to what you read on page 4.

The miscellaneous papers section is largely a collection of receipts and membership forms to the synagogue, but hidden within is a story of political, economic, and social involvement of Jews during WWII. There is also a large amount of information about the origins of the Jewish community. Many papers are also written in Hebrew with an English translation. Despite this section containing a bunch of random receipts, there are a few documents worth noting.

This document can be easily distinguished by its large print with the words “Universal Yeshivah of Jerusalem” across the top. It has no listed author, only that it was from the Academy of Higher Jewish Learning in New York. Like many others in the folder, the document asks for donations from the Synagogue. Half of the document is written in Hebrew script and the other half is printed in English. The Hebrew script is common in these miscellaneous papers; however, they usually are accompanied by some sort of English translation. In this document look for why the author calls for donations.

Find a 4-page untitled document that looks like it could have been used as a program for a holiday service at the Synagogue (basic white paper with typewriter style text). It lists the names of the members of the church in order to thank them for their support and wish them a happy New Year. It also has a few songs listed on it that were sung in both Hebrew and English. On the third page of the document, the paper discusses proper dignity within the Synagogue and how to conduct oneself while at a service. Explore the rules section to see how Jewish women were treated at the time.

This is the smallest document in the folder. It’s a little red note card from the United Charity Institutions of Jerusalem. Once again it is asking for donations, but uses some interesting rhetoric to do so. The slip mentions that if you do not donate, you will forsake your family because they donated in the past. Take note of why these organizations are desperate for donations based on the time period.