Letters of World War II in the Pacific 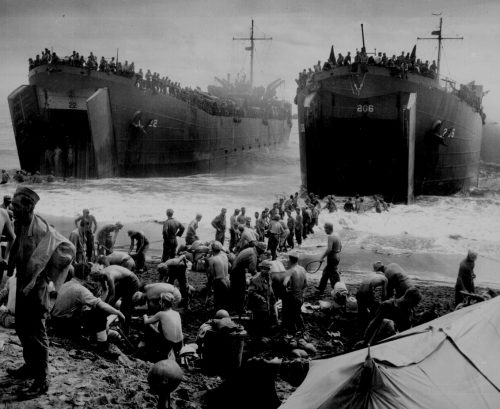 This collection is made up of a series of newsletters. Each one contains letters from La Crosse men during World War II. The La Crosse native who started these newsletters was C. Ranous Stewart, often referred to as “Boog” in the letters. He printed them so that all of his friends would stay up to date with each other and current events in La Crosse. The men in correspondence are in the service stationed around the world, so staying in touch was very important. This Friendly Finding Aid focuses on one specific man stationed in the Pacific Theater, John Berg. His letters provide an inside look at the invasions of multiple islands, interactions with native islanders, 1940s popular culture, and what life was like for a soldier stationed in the Pacific. The letters included illustrate the true horrors of war, including face-to-face experiences with the Japanese, while also presenting what men did in their down time. Thus, these letters do a great job illustrating that the war was not constant violence and battles, and that not everyone fully supported it.

This collection is composed of one box with eight folders of newsletters. Each folder contains roughly fifteen newsletters, all written using a typewriter so they are very easy to read. The newsletters are arranged by date for convenience. John Berg wrote several letters found in each folder; however, this finding aid highlights some of his more exciting and important letters for understanding World War II in the Pacific. To access these letters, follow the folder number and date on the front page of the newsletter.
*This collection contains offensive language, mature themes, and racial themes.

November 16, 1943
John Berg begins to describe his experiences and updates his La Crosse readers on his life in the navy out in the Pacific. By various clues, one can assume he is currently stationed at the American Samoa Islands or New Guinea, but he is not able to disclose that information. Read this letter to find out how Berg reacts to his first encounter with natives.

December 28, 1943
Berg describes his experience in the Gilbert Island Invasion and the Invasion of Tarawa. He details the true horrors of war and notes that the papers in America have toned down the bloodshed of the invasion vastly. Berg explains some gruesome images of combat. Reading this letter will give you a first-hand look at the combat strategies of both Japanese and American soldiers.

March 9, 1944
John Berg describes his part in an invasion against Japan. He talks in detail about fighting and killing the Japanese. The newsletter contains a submission from a man stationed in the Pacific, Eddie Schlutter, as well. In his letter Schlutter talks directly to Berg about his experiences. He and John share a mutual hatred for the Japanese, and Eddie talks about not liking being in such close contact with them. He uses a racial slur calling them “yellow apes,” a term that is seen multiple times throughout this collection. Read this newsletter to understand the racial tensions that became prominent during the war.

March 21, 1944
John Berg explains the toll the war is having on the ships and submarines. He also describes a tradition among the Navy of flying the Japanese flag for every vessel they sink. He says how well the submarines are doing and that they should receive more credit for their part in the war in the Pacific. Read this letter carefully because it will help you better understand his upcoming July 19 letter.

April 4, 1944
Berg shares that he is in the mid Pacific and has crossed the equator, stopping at an island infamous for its resistance to Marines. If you want to learn about how soldiers in the Pacific kept themselves occupied during their down time, this is the letter to read!

June 13, 1944
John Berg informs everyone that he has moved to a base that he considers the “last outpost of civilization.” Although his experience there was not horrible, his commander did work them hard. Find out what Navy men did when they were stationed at a remote destination and essentially cut off from the rest of the world.

July 19, 1944
John Berg updates everyone that he shot down a Japanese plane and now they have a Japanese flag on the side of their ship. (See folder 2 newsletter March 21,1944 to know more about this tradition.) He reports heavy casualties at Saipan, and hearing news over Japanese radio about new German rockets. He mentions that the broadcaster “Tokyo Rose” was starting to get cocky almost challenging the US to a raid. Use this letter to understand the role that media played in the war.

August 22, 1944
This letter from John Berg is one of the highlights of the whole collection because it contains a war poem recited by one of the Navy men at a celebration. Before he gets to the poem, Berg lets everyone know he is now safe in Guam after a tough naval operation. He describes running into John Roosevelt, son of Franklin Delano Roosevelt who was president at the time. (Why was the president’s son on Berg’s ship?) Berg complains about the movies they are sent by the government, saying that if he sees another “band playing, flag waving, patriotic production” he will write a letter to his Congressman! Finally, Berg describes the celebration held for his ship’s one-year anniversary where the poem is highlighted. Consider how it reflected the morale and sentiments of Berg and his shipmates. Below is the first stanza:
To The 243
Heres to the LST 243
You old iron clad bitch,
We brought you down the Mississippi,
And right on thru the ditch.

September 12, 1944
Berg gives an update that things in the Pacific are starting to move fast and that his unit is not staying in one spot for long. He thinks that it will not be long before the US takes back the Philippines. He also provides an interesting description of an island he has visited. Notice the contrast of this island with other islands that saw heavy combat. Try to relate what Berg says in this letter with his December 28, 1943 letter.

October 19, 1944
Berg describes an invasion taking place in Peleliu. He mentions Japanese tactics. After winning the battle he is glad to be leaving but wished they would go somewhere “civilized.” Look over this letter to understand the toll war had on soldiers’ mental health.

December 6, 1944
In this letter Berg promises his friend, Al Scott, that he will keep an eye out for his brother who is a prisoner at a camp in the Philippines. Read this letter to see the camaraderie war established between men and how they all shared a common longing for the war to be over.

February 27, 1945
This newsletter contains two submissions from Berg. The first letter dated February 2, informs the men that the censorship restriction has been lifted and he can finally tell them all the places he has sailed recently. Along with many other places, he mentions that he visited Lae, New Guinnea which was the last place Amelia Earheart was seen alive. He also describes his interaction with the Filipinos. The second letter by Berg dated February 8, lets everyone know he is coming home. Read this newsletter to hear Berg’s role in the Linguyan Gulf Invasion and stories of his time spent with the Filipino natives.