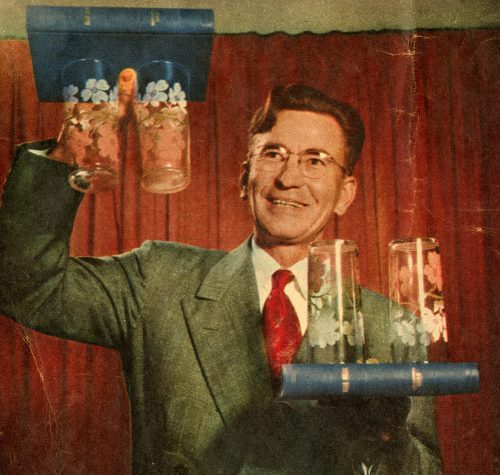 Raymond Bice was born in 1896 in La Crosse, Wisconsin. Throughout his life he held many occupations such as lumber yard owner, contractor, assemblyman, chairman of local organizations, and part-time magician! During the beginning of his political career, during the 1940s, Bice started doing radio talks on La Crosse’s station W.K.B.H. His talks are typed and address a variety of topics, such as education, mental health, highway safety, how politics work, and even beer!

In 1947, Bice proposed legislation that would set and enforce a speed limit law for rural roads in Wisconsin. He believed that the number of deaths was too high and preventable. Believe it or not, this legislation was controversial! Indeed, when Bice first tried to pass the law, it was defeated by a vote of fifty-four to thirty-eight. In 1949, the legislation did pass, and the new speed limit law called for a top daytime speed of 60 miles an hour, and a nighttime limit of 50 miles an hour. The law also placed signs on all roads. This was Bice’s most influential work as a politician, and the first speed limit Wisconsin had seen in over 20 years.

Raymond Bice was a very active member within his community. Through his radio shows he demonstrated how much he cared for public interests, and how he wanted to inform his constituents, the people he served. He used these shows, correspondence (letters), and public events to hear the opinions of the general public. When not on the radio or in office, he even put on the occasional magic show for the community!

The collection consists of four archive boxes that contain information on Raymond Bice from the years of 1946 to 1968. The boxes include an oral history, letters with community members, news clippings, and documents regarding Bice’s legislation. This Friendly Finding Aid will focus on Bice’s use of radio to create public support for passing a speed limit law in Wisconsin. The documents you’ll be using are only in three boxes and four folders! Most of the documents in the folders are typed and organized, making the collection easy to read!

The boxes that you’ll be reading are not in order, but that’s nothing to worry about! If you follow the order below, everything will make sense.

This Box contains Bice’s oral history that summarizes his personal and political life.

Folder 1: The oral history in this folder is around a fifty-page interview that includes general history, Bice’s life, and how he started his career in politics. It’s great background reading, but you don’t need to read all of it. That would take a very long time! The reading is broken up into four interview sections that each have their own page numbers. So, if you skim the booklet you’ll notice that there is more than one section labeled “Transcript of Raymond Bice.” Think of each of these as the beginning of a new chapter. Go to the last chapter and read pages four through seven. Bice talks about how his speed limit bill was only a small part of his twenty-two-year tenure on the Senate. Read this to find valuable information on why Bice was passionate about his community and the laws he made.

In box four you’ll only be using folder 10. The folder is not very big but contains important information. There are three types of documents you’ll want to read.

Folder 10: First look for a white, folded spread sheet. It shows the number of automobile accidents and deaths in Wisconsin from 1941 to 1947. The sheet also provides information on driving conditions and other circumstances that contributed to accidents. Keep in mind that it was Bice’s goal to reduce the number of deaths occurring in rural areas. By the 1940s thirty-four states had already adopted new speed limit laws and most of them had fewer fatalities per capita than Wisconsin. Speed was especially problematic in rural areas because there were fewer “educated” drivers and less enforcement to patrol the area.

The next documents to find are government documents. They are not numbered or organized by date, which may make some of them a little difficult to find. The documents will usually have an official-looking seal on them and will have a fancy signature at the bottom. These are important because they suggest that Bice was not the only government official that wanted safer speed laws. These papers are important. Read them to find out who the other people and organizations were that supported Bice’s proposition.

Last, find a greyish-white paper. The title is, “A Father Writes His Son.” It is a letter written by B. McCutcheon to his son. It is in support of Bice’s law. The letter talks about how the boy’s parents don’t feel comfortable with him driving at night or speeding. It’s emotionally appealing and personal, and is a very persuasive argument for safer roads. Do you think that this letter is real? Or was it made up to serve as propaganda? Think about this as you read.

Box two contains folders with Raymond Bice’s typed radio speeches. These speeches are numbered and cover a wide range of topics such as education, mental health, teachers, and the primary focus of this FFA, speed limit and highway safety!

You’ll be looking at Folders 26 and 27. One of Bice’s main goals as a politician was to educate his constituents. Bice’s most common radio subject was about highway safety, but it was closely followed by the importance of education. For example, speeches 10, 11, 12, 20, 39, and 40 all address the significance of a good education and teachers’ rights. Bice argues that education is important because it supplies the future with a reliable work force. If you’d like to read about education, these speeches will give you a good starting point. Bice’s radio shows addressed public concerns, and through them he tried to create a well-informed population that was able to understand and contribute to society.

Folder 26: This folder contains some of Raymond Bices typed W.K.B.H. radio speeches. These talks address statistics and how many people are being affected by speeding drivers. Bice often addressed the same issues in different speeches. Below are a few you’ll like. As you read notice how Bice uses factual evidence and emotional appeal to tell the public why they should be concerned with safer highway regulations.

• Speech numbers 5 and 21 deal with the speed limit.

• Speech 7 discusses the financial aspects of owning a car in the U.S.

• Speech 40 is titled “America on Wheels” and talks about how Americans have been safe with their use of cars.

Folder 27: This folder contains statistical information on accidents that happened at the local and national scale. Statistics act as Bice’s main argument in advising the public on safer roads, and he uses them often. These radio talks also show how farmers and law enforcement agreed with a new speed limit bill for safety and security reasons.

• Speeches 42 and 46 contain information regarding the number of fatalities in car accidents as a result of speeding.