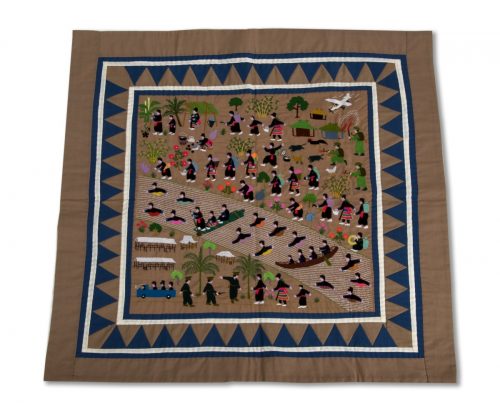 > Oral histories referenced in this collection:

This collection is made up of three interviews: 1) a women’s sewing group, 2) Koua Vang, and 3) Romain Lor Vang. It’s part of a larger collection of Hmong oral history interviews by Ge Vang. The Hmong are an ethnic group that can be found in Southeast Asia. Today many Hmong live in the United States because of the Vietnam War. During the 1960s, the Hmong were recruited by United States military to fight secretly for us. We lost the war, and the Hmong had to flee. Between 1975 and 1980, over 42,000 Hmong political refugees resettled in the United States. Today, Wisconsin has a significant Hmong population, some of whom can be found right here in La Crosse! These interviews discuss the daily lives and struggles of Hmong Americans, especially the differences between the old ways and the new. Ge asks a lot of questions about the survival of Hmong culture in the United States.

The collection consists of three folders that each contain a separate typed and easy-to-read transcript for each interview. There are also audio recording CDs that are included with each transcript that you can listen to and follow along with the transcript!

NOTE: Ge Vang conducts all of the interviews. He is not closely related to Koua and Romain Vang.

In the interview with the women’s sewing group, Ge Vang talked with a group of Hmong women some related as sister-in-laws, aunts, and mother-in-laws. The group discussed their family and lives in Wisconsin, living in the U.S. as members of the Hmong community. Children are a topic throughout the interview. They are becoming Americanized and what many of the women consider rebellious. The women are very concerned because they want to preserve the Hmong culture and identity. Their children however seem uninterested. The children’s rebellious behavior and their disinterest in traditional culture shows the growing differences between the Hmong parents and their Americanized children. Ge Vang’s interview with the women’s sewing group is 15 pages long. Also, the transcript of the women’s sewing club abruptly ends mid-interview for unknown reasons!

Pages 1-7: The group of women introduce themselves and discuss the future as they see it. They talk a lot about raising children in America, and their kids’ assimilation to U.S. culture.
Pages 7-11: The women address dating and marriage in the community, and how it is different in America. They also talk about their children’s education.
Pages 12-14: The women discuss how they discipline their children and household rules.

The second transcript is an interview with Koua Vang. Ge and Koua discuss Koua’s early memories of life in Southeast Asia before moving to the United States, and his adjustment to life in La Crosse. Koua and Ge talk a lot about living in the Hmong community, and how Koua faced challenges balancing life as a Hmong man and living in the United States. Toward the end of the interview Koua confesses he believes that eventually the Hmong language and culture will disappear in the United States because the younger generations will not learn traditional practices and language, and because of the clash between the U.S. and Hmong culture. The transcript of Koua Vang’s interview with Ge Vang is 22 pages long. This transcript’s questions and answers have been translated into English from Hmong!

Pages 1-7: Koua introduces himself and discusses his early childhood, including a few memories of escaping into Thailand! Ge and Koua also discuss the difficulties of coming to the U.S.
Pages 7-10: Koua talks about his wife and son, and his marriage. He also talks about college and his career goals.
Pages 11-15: Koua and Ge discuss traditional Hmong practices and modernity, as well as his own self-identity as a Hmong person. He also brings up his thoughts on his clan and family.
Pages 15-22: Ge and Koua address gender roles and equality in the Hmong community, as well as the future of the Hmong culture.

The final transcript of this collection is an interview with Romain Vang. Romain, who was a college student at the time of the interview, recounts memories of his childhood in the United States and Southeast Asia. Throughout much of the interview, Ge and Romain talk about Romain and his family moving to the United States. They also discuss some the conflicts that resulted from the differences between the U.S. and the Hmong community. Romain confesses that he doesn’t think that the Hmong culture will last in America, and that it will eventually disappear in the coming generations. Romain Lor Vang’s transcript is 28 pages long.

Pages 1-4: Romain Vang introduces himself and talks about being born in Laos. He also talks a little bit about life in Thailand in the refugee camps, and moving to the United States when he was eleven. (Take Note: This means that Romain could remember life in Southeast Asia and what it was like to adjust to life in the U.S.)
Pages 4-10: Romain tells about school and dating in America, and problems such as racism. He also discusses getting a job while in high school.
Pages 10-14: Romain compares Hmong culture to American culture, and how these differences can sometimes cause trouble! He also talks about his family’s clan in Eau Claire.
Pages 14-20: These pages cover Romain’s college and career goals. Ge and Romain also examine the future of Hmong culture in the United States, including religion.
Pages 21-28: Romain examines the generation gap in Hmong culture and his relationship with his parents. The two also discuss family relationships and marriage.