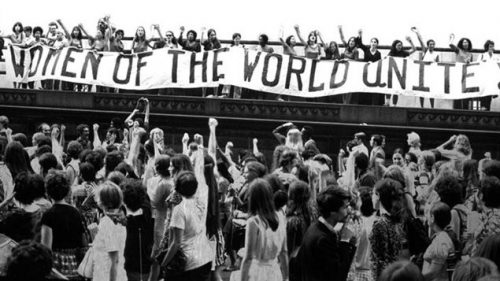 The La Crosse County Women’s Political Caucus (LCWPC) operated in the La Crosse area from 1973-1981. Their goals included encouraging women to run for elected offices, providing information about campaigns, and educating female candidates on issues on the campaign trail. They also sought to provide the public with more information about the Equal Rights Amendment (ERA) and held a forum about Affirmative Action. The women in the Caucus offered services for feminist candidates that they had sought out to run for office. Members would babysit, help make phone calls, or provide coffee for the candidates. The Caucus put a lot of energy into recruiting women and advocating on behalf of the ERA. Along with the ERA the women would write to state congressmen to discuss various legislation that applied to women in Wisconsin. The Caucus held workshops for women interested in getting into politics, and even marched in the Maple Leaf Parade dressed as women from various eras!

This collection is made up of fifteen folders, housed in one box. This FFA, however, follows the folders that describe what the LCWPC feminists (people who believe the sexes should be treated equally) were most passionate about, how they interacted with the La Crosse community, and how they operated as a group. It follows a story about La Crosse women in a movement, known as second-wave of feminism, which was a major turning point for women across the United States. Selected below are a few folders that will help give a better understanding of what this group did to benefit the condition of women.

The LWCPC operated similarly to other branches all over Wisconsin and the US. Look at the bylaws (rules and guidelines for how the organization will be run) in this folder and notice the description of the group and what their goals as an organization were. Read this to get a sense of how women’s organizations worked.

This folder contains newspaper clippings that are about the La Crosse County Caucus. There is an article about Sharon Imes, “First Woman Alderman: ‘Not a Feminist.’” What does she say about the Caucus and her stance on feminism? Pay attention to articles about elections and ask yourself how many women there were compared to men. How are they described (mothers, teachers, wives, or other roles)? How are the men described? Pay attention to the demographics to get a better idea of who was involved in the organization. In other words, how many working, middle, or upper-class women were there in the Caucus? What about Caucasian, African American, Asian American, or Hispanic members?

This is the biggest folder in the collection and is devoted to correspondence. There are also random things like an issue about membership fees with the organization’s head in Madison, and registration to walk in the Maple Leaf Parade in 1975. It’s fun to see what the women were doing, and how they interacted and viewed their La Crosse community. It’s not necessary to read the entire folder but leaf through to find something interesting. For example, there is a flyer describing the frustration wives felt about being listed in the phonebook under their husband’s names.

This folder is completely dedicated to the Equal Rights Amendment. Look for notes about frequently asked questions and answers about the ERA, along with information the women probably used to discuss the amendment with the public. Much of the debate about the ERA was centered on how women’s traditional roles would change as wives and mothers. Pay attention to how the women in this organization felt the ERA would address this.

This folder contains correspondence with contemporary state congressmen. Most frequently they contacted local politicians, Virgil Roberts and Paul Offner. Some of the letters to Roberts and Offner are about tax reform, but others tackle real issues surrounding anti-rape laws and abortion rights. There is one letter to Governor Wallace of Alabama to advocate for the ratification of the ERA in his state. Pay attention to the language the women use, is it polite or assertive and how do the men respond?

Here is a book you might find helpful in understanding the ERA and how it failed.
Mathews, Donald and Jane Sharon De Hart. Sex, Gender, and the Politics of ERA: A State and the Nation. New York: Oxford University Press, 1990.