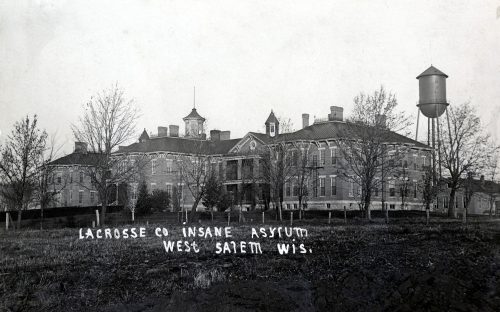 Investigation of Cruel and Inhuman Treatment in the La Crosse Co. Insane Asylum

This entire collection, “La Crosse County Clerk Reports and Papers 1852-1945,”  is made up of 10 boxes.  This review, however, only looks at one of the boxes, and only one of the folders in that box!

Box 4, Folder 9 contains a 118-page booklet. This super interesting booklet has 32 different testimonies about charges of cruel and inhuman treatment of patients and attendants in the La Crosse Co. Insane Asylum. These testimonies were given in 1898 during an investigation.

PLEASE NOTE: Charles and Albert were brothers. Charles was the Superintendent and Albert was an attendant. Sometimes Charles asked questions during the testimonies, but other times he was a witness who answered questions.

The page numbers listed below do not cover the entire booklet.  If you do, however, decide to read all of it, you’ll find additional short testimonies given by previous asylum workers, people living in West Salem, family members of patients, and nearby farmers who either did or did not witness cruel and inhuman treatment of patients from workers at the asylum.

Pages 1-30 include John E. Johnson’s testimony. He worked as an attendant and reported that Albert McKown and Herman Stokes “took the club” to patients that attempted escape, and took them inside a room he called the “strong room,” where patients were punished for long periods of time—sometimes in the cold and without food. This is the longest testimony.

Pages 35-56 are the testimony given by Herman Stokes, an attendant who was reported for striking patients. He reported Albert McKown for mistreating the patients as well.

Pages 57-62 contain the testimony given by the long-time doctor of the asylum. He contradicted the charges, saying he never witnessed poor treatment of patients.

Pages 69-78 include attendant Albert McKown’s testimony. He admitted to violence, though not to the amount reported by others.

Pages 113-118 are the testimony given by Superintendent Charles McKown. He admitted to some knowledge of problems, though he does not seem to consider the asylum to be a place of inhuman treatment.