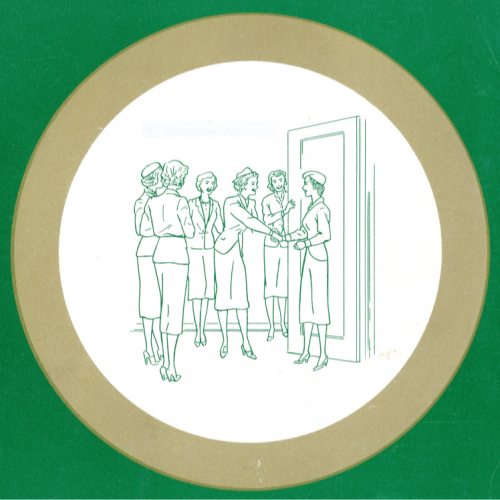 This is a very large collection. In fact, it contains 16 boxes and multiple folders within those boxes! But don’t worry, this FFA will primarily focus on the La Crosse Business and Professional Women’s Club’s (BPW) involvement with the Equal Rights Amendment during the mid 1950s through the mid 1970s. The Equal Rights Amendment (ERA) was proposed in 1923, three years after the 19th Amendment which allowed women to vote. The introduction of the ERA appeared to be the next step in bringing “equal justice under law” to all citizens. The proposed Equal Rights Amendment stated that rights guaranteed by the Constitution applied equally to all persons regardless of their sex. Not until 1972, was the ERA finally passed by Congress and sent to the states for ratification. Throughout this collection you will learn about the struggles women went through in order to get the ERA passed through Congress, especially the La Crosse BPW’s persistent actions in gaining supporters, including leading politicians.

This collection contains many handwritten and typed letters, documents from senators and politicians, and flyers about various events that took place on campus at UW-La Crosse. There are also, pamphlets about the organization and what the ERA truly entailed, and an oral history where you can listen to the voices of the Business and Professional Women’s Club members in the 1960’s! This finding aid focuses on three boxes and folders that contain the most relevant and important information in regards to BPW and their work. They are: box 2, folder 8; box 1, folder 3; and box 5, folder 10. Box 2, folder 8 is all about the history of the La Crosse Business and Professional Women’s Club, which dates back all the way to 1916. This folder will give you historical context, which is necessary for your research. That is why you will start with box 2! Box 1, folder 3, focuses on the BPW’s legislative committee. Finally, box 5, folder 10, focuses on the Equal Right’s Amendment. The documents within these boxes are typed and easy to read. If you are interested in how the La Crosse BPW was involved in getting the ERA passed by Congress and their struggles along the way, then this is the collection for you!

Find the document titled, “La Crosse Business and Professional Women’s Club: La Crosse, Wisconsin. 1916-1980 History of La Crosse BPW Club.” This packet will give you a timeline of events beginning in 1916. It contains activities, achievements, and awards. Also, find the “BPW Fact Sheet,” which contains important facts about the club. You will be able to gain a sense of the history of the BPW and how it has evolved over time with just these two documents.

This folder, contains a lot of documents relating to the process of turning the ERA into a bill ready for Congress. There are numerous letters between members of the BPW and various people of importance during this time, especially in politics. Some of the letters are written from the head of La Crosse BPW to the President of the National BPW, Osta Underwood. Others are letters between members of BPW and Wisconsin’s U.S. Senators, William Proxmire, and Gaylord Nelson. (Gaylord Nelson went on to be Governor of Wisconsin) There are also multiple letters written from the Staff Assistant of President Nixon, Barbara Franklin.

There are multiple important letters to read in this folder. They can be found by the date in the right hand corner. The earliest document is from 1942! Page through to find the 1970’s. There are many worth reading up through the early 1970’s. Please take the time to read not only these two letters below, but many others throughout this folder.

December 3, 1971
Printed at the top of the page is, “The White House.” This is a letter from Barbara Hackman Franklin, the Staff Assistant to President Nixon. Look for a quote within the letter portraying Nixon’s support for the ERA and acknowledgments towards the BPW’s contributions.

February 24, 1972
Printed at the top of the page is “United States Senate.” In it, Senator Gaylord Nelson writes to BPW President Eileen Kramer to express his support for the ERA and applaud the BPW for all of their hard work. Within the letter, Nelson explains the importance of women’s rights through a personal story. Read to find his mother’s battle with women’s rights.

Want to know what the Equal Rights Amendment (ERA) was all about? This is the folder you must look into. Find the booklet with the really long title, “Interpretation of the Equal Rights Amendment in Accordance with Legislative History.” Similar to a FAQ page, this booklet is filled with many questions such as, “Will the ERA affect private business or personal relationships between men and women? Will divorced women lose support rights?” Each question is followed up by answers from Congresswomen and Senators.

This Finding Aid also refers to the Oral History of: Inga Gerber

This Oral History can be found online, on the University of Wisconsin- La Crosse Murphy Library website. During this twenty-minute interview, listen for details about what it was like to be a woman involved in the BPW during the 1960s-70s. Inga Gerber tells the story about how she got involved with the La Crosse BPW and her personal goals for herself and the club!