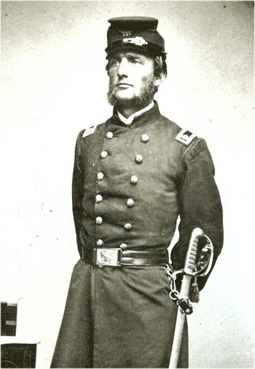 This exciting collection boasts plenty of documents showing how Civil War soldiers from Wisconsin fought and lived as members of the army. Since these soldiers were all from Wisconsin they fought for the Union side against southern states, or the Confederacy. Both sides had huge armies separated into smaller units. These documents correspond to the smaller units called companies and regiments (see glossary). They give you access to a ton of great details about brave Wisconsinites and fighting in the Civil War.

The documents in this collection can be thought of as falling into two categories: 1) documents tracking individual soldiers and their experiences and 2) descriptions of the combat activities.

There are a range of documents that help bring the characteristics and experiences of individual soldiers to life. Muster in papers, for example, give information about the soldiers when they signed up for the army, like height, hometown, and occupation. Discharge records give reasons why soldiers left the army, often because they were injured or killed. Court cases shed light on the rules soldiers needed to follow and the corresponding punishments. The large numbers of troops and savage combat of this war meant that armies were constantly replacing their soldiers. As a result, muster in and discharges appear in every folder in this collection and provide a great sense of the range of Wisconsinites who fought in the Civil War.

Soldiers’ letters and written histories are much rarer but reveal the important role these Wisconsin units played in combat. There is a letter from one of the North’s most famous and brilliant generals, William T. Sherman. He praises his Wisconsin troops for their success in battle. There is also a written history by Lucius Fairchild. It gives specific details about battles. Fairchild describes the “murderous fire” and “disaster” his regiment encountered in some of the most important battles of the war like Bull Run and Antietam. Amazing stuff!

The handwriting in these documents can be challenging – but not impossible – to read. Documents which describe individual soldiers’ identities (like muster in roles and discharge papers) are forms with a lot of filled in blanks, which makes figuring out the handwriting relatively easy, while Fairchild’s documents contain paragraphs of rather sloppy penmanship. I suggest beginning with the documents that describe individual soldiers so that you can get used to this style of cursive before tackling long written paragraphs in Fairchild’s and Sherman’s documents.

This collection consists of one small box with six folders and two larger boxes each containing over ten folders. The folders in the small box correspond with a company, while those in both large boxes focus on the 2nd Wisconsin regiment. This review focuses on just a few of the folders from each box, focusing on soldiers and combat.

Folder 3 contains William T. Sherman’s letter praising Company I of the 8th Wisconsin regiment for their success in battle (until an illness in camp kept them from entering future combat).

Folder 4 holds an order given to the whole regiment which describes soldiers’ daily routines like when they woke up, ate and drilled. Very interesting!

Folders 1 and 2 contain the largest group of court cases in the entire collection. These documents reveal the rules soldiers needed to follow and the punishments if they disobeyed them.

The military has its own language, and these documents were written by soldiers trained in this specific militaristic way of speaking and writing. Here are some explanations of words you will need to know. They are not in alphabetical order. Broader phrases that will help you get a grip on the overall war effort are listed first with more specific language towards the bottom of the glossary. Words related to one another are also grouped together in the glossary like those describing weapons or army organization.

Union: Soldiers who fought for the North. Southerners also called them Yankees and Federals.

Confederate: Soldiers who fought for the South. Northern troops also called them rebels.

Infantry: Soldiers who fought on foot. These soldiers made up most of the Northern and Southern armies and participated in the largest battles.

Cavalry: Soldiers who fought on horseback. Both sides used these soldiers to scout enemy positions before sending in larger numbers of infantry.

Company: One of the smallest groups of military organization, usually around 100 men. Companies consisted of soldiers from the same general area. So a typical company of soldiers might all come from La Crosse, or all from Western Wisconsin. Companies were named with letters based on the order in which they were recruited. So Company C was the third company to be recruited to form a regiment.

Regiment: A unit of military organization that held ten companies. Regiments held only members of the same state and were named based on the order in which they were created. So the 2nd Wisconsin, for example, was the second regiment of soldiers to be recruited from Wisconsin.

Private: The lowest ranking soldier. These soldiers made up most of the army.

Officer: The general term for anyone in the military with responsibilities and authority over other soldiers. Considering privates are the lowest ranking soldiers, an officer is any soldier who held a rank above a private. There were many specific types of officers but three important ones are often discussed in this collection: captain, colonel and general.

Captain: Leader of a company. This soldier had to take responsibility for his 100 men while also making sure they helped the regiment achieve its overarching goals in camp and combat.

Colonel: Leader of a regiment. This soldier made sure all of the companies were cooperating while keeping track of the wellbeing of the entire unit.

General: These are the highest ranking soldiers in the army. These men had thousands of soldiers under their command and dealt with larger, more complex strategies in combat and concerning the overall war effort.

Rifle: A special type of gun that puts spin on the bullet as it travels through the air. This was the standard gun given to infantry soldiers.

Minié Ball, or, Minnie Ball: This was the most common bullet used in Civil War. This new bullet was perfectly designed to be fired out of rifles, allowing them to travel farther and faster than ever before.

Ammunition: The materials shot out of guns including bullets and cannon balls.

Bayonet: A long, knife-like piece of steel soldiers attached to the end of their rifles. This was meant to be used when soldiers ran out of ammunition and fighting became up close and personal.

Fire: In a military context, soldiers attach a verb to the word fire to indicate where soldiers are shooting. Soldiers who were being shot at are “taking,” or, “under fire” while those who are doing the shooting are “delivering fire” or simply “firing their rifles.”

Casualty: A soldier who has been injured or killed in combat. (A soldier does not have to die to be a casualty.) Soldiers who cannot be found after a battle are first determined missing and after some time has passed are grouped together with the other casualties.

Muster in: These papers were used to document the recruitment of civil war soldiers. Soldiers immediately provided personal characteristics on these standard forms upon enlisting in the army. These documents provided the army with a 19th century equivalent to a data base of all of their soldiers.

Court Martial: A military court consisting of high ranking officers and special military judges. The army had strict rules for its own soldiers to follow and if they were caught disobeying them they were removed from combat and had to present their case before this court.

Reveille: A signal, usually a trumpet call, given to wake up the soldiers.

Tattoo: This is the signal given to soldiers so that they knew lights out was about to be ordered so that they could prepare for bed.