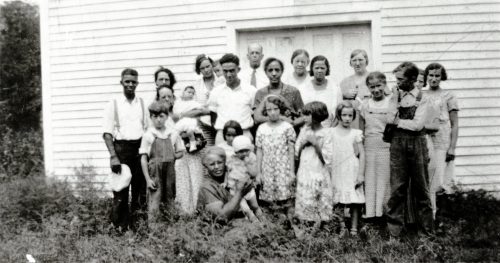 Anthony B. Stelter wrote the booklet, All Roads Lead to Hope Valley: A Look at Black and Tri-Racial Migration to the Hope Valley Located in the Forest Township of Vernon County, Wisconsin. This community, which is called by different names, was home to a mixed-race group of settlers. The families ranged from free Black farmers, former slaves, white farmers, Native Americans, and those of mixed descent. In the South during the 1800s many Blacks were enslaved but there were also free Blacks that owned their own land. Leading up to the Civil War in the 1860s, more and more restrictions were being put on the free Black community, which caused some to move north. Some eventually made their way to Wisconsin and settled here. One of these families was the Walden family, of which Anthony B. Stelter is a descendant!
This collection includes histories on the major families that populated the Hope Valley area in Vernon County. They married, worked, played, and went to church together. As the settlement grew throughout the generations these families became related to one another through kids and grandkids. There even were a handful of men from the different families that enlisted together in the Army during the Civil War and some even fought in the same units!

This finding aid will focus on a few specific families, the Revels, Roberts, Walden, and Shivers. It follows their lives through the 1800s during times of both growing racism and discrimination. Despite these issues, the families persisted and eventually settled in Wisconsin. This collection includes both primary and secondary sources and gives a many-sided view into this unique community.

The Revels were a free mixed-heritage family who prior to living in Wisconsin had lived in North Carolina as farmers in a community with free Blacks. The family included; Macajah Revels (father), Mourning Jane Jacobs (mother), and sixteen children! They moved to Indiana in 1845 and then eventually Wisconsin. A lot of information on this family can be found in Box 1, Folders 8 and 19. There are documents that describe their family tree, and folder 8 has a brief history of the family name, origin, and how they came to settle in Wisconsin. Look through the papers to find out where the name Macajah came from.

The Roberts family can be found in Box 1, Folders 9, 10, and 19. (Two of the members of the family, Isaac West Roberts and his grandson Ishmael Roberts, have folders designated to them.) This family came from the East Coast before they settled in Wisconsin. Not only did four members of this family serve in the Civil War but they also had a family member who fought in the American Revolutionary War! This information about their military history can be found throughout the three folders, but most of the information is in Folder 19. In folders 9 and 10 there are family trees and certificates of freedom for some of the Roberts members. Look for the certificates of freedom. They were needed for people of color to move around the United States to prove that they were not slaves. Also, see how the Roberts and Revels families are related and other interesting information about this family.

The Walden family also has two members with folders created specifically about them, Mike Walden and Samuel Walden. These folders are in Box 1 and are numbered 14, 15, and 19. This family group also came from North Carolina before settling in Wisconsin. They were a “mulatto” family. (This is an old-fashioned term that is not used anymore. It means mixed race. Although, this collection uses the term “mulatto”, please do not use it in your own work, use mixed-race instead.) The Walden family also has familial ties to the Revels and Roberts families! Look in the folder 15 for marriage certificates for both Elizabeth Walden and Samuel Walden.

The Shivers family information can be found in Box 1 in folders 11, 12 and 29. This family originally worked as slaves in Tennessee. They kept the last name from their slave owner. Folders 11 and 12 focus on brothers Ashley and Thomas. In the folders there are documents about births, and the family trees of both Ashley and Thomas. Folder 29 contains many postcards sent between family members from around 1920-1930. They were sent from Wisconsin, Minnesota, Ohio, Kansas, and even California. It is interesting to see with your own eyes the handwriting of the people included in this collection.

See also Box 2 in folders 2 and 3 to find large stacks of scanned images of the people who lived in Hope Valley. The photos date from the mid-1800s into the twentieth century. By looking at these photographs you can get to know the individuals and families that are presented in the various documents found in this collection. You can put faces to the names and see the different families interacting together at church and school!