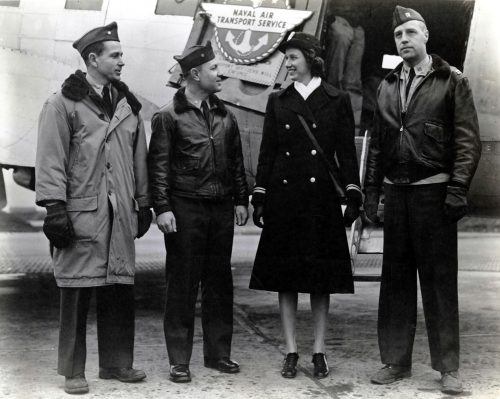 This collection contains many wonderful letters from across the globe.  They were all written to Frank J. Fuchs from friends and acquaintances serving in the American Armed Forces during World War II. The letters are divided into two boxes. Box 1 has 14 folders filled with letters dating from 1942-1943, all in chronological order. The first folder is different than all the rest.  It holds a few “Return to Sender” letters written by Mr. Fuchs himself. Having never reached their intended reader, they were returned. Folders 2-14 are all letters from soldiers to Mr. Fuchs.  They are labelled by month and year, and ordered chronologically (ex: March 1943, April 1943, May 1943, etc.). In each folder the letters are chronologic by day. This organization continues with Box 2, which holds 8 folders containing letters from 1944 to September, 1945. The last two folders in Box 2 contain Mr. Fuchs’ many address cards, ordered alphabetically, and the Eagles Service Rosters. Since the collection of letters is ordered chronologically, it is easiest to find specific letters by knowing the date written.

Frank J. Fuchs was a prominent member of the Fraternal Order of Eagles, a charitable club still active today.  He even became president of La Crosse’s branch of the club during WWII. Throughout the war he wrote to over a hundred fellow members – some close friends, others merely acquaintances – who were serving overseas. These men varied in rank, education, and age. Most were bachelors others, such as Roy Cleary, were husbands. Their military duties varied greatly as well. Many were average infantrymen, but some piloted airplanes, drove tanks, worked artillery, did vehicle maintenance, and saved lives in hospitals and on the field. Some men were brothers, and some served in the same divisions, but mostly they were soldiers scattered across the globe. In the early years, (contained in Box 1) most of the letters are from soldiers still being trained in the U.S., but as time goes by these men all begin to travel overseas to fight. Understandably, letters arrive less frequently from men serving on the front, and combat was rarely the topic of discussion in their letters. Instead, because many of the men were terribly homesick, La Crosse, and club happenings are common topics!

Below are all of the men Frank Fuchs received letters from through the years 1942-1943, sorted by date for easy retrieval. Also, included is their location. If no location is mentioned, it is due to the government’s censorship of mail, a measure taken to protect the soldiers and the war effort. Highlighted are a few of the men whose situations or duties may be of particular interest to readers. Before cell phones or the internet were invented, to keep in touch friends and family needed to write actual letters if they wished to communicate over long distance. While slow and painstaking in comparison to today, the value given to these messages was often much higher than any email or text sent today. It was a more intimate form of communication and letters were often kept for sentimental value.

WARNING: Most of these letters are handwritten in cursive. While most can easily be read, some take a bit more effort and patience. Also, 1940s slang is slightly different from today. Some phrases may be outdated or confusing. When in doubt, ask!

Brothers Alois and William Abel both served on the Pacific front and even in the same base for a short while. They mention one another frequently in their letters and their brotherly bond can easily be seen. Both were sent overseas but only William continued to write to Frank once deployed. Alois signed his letters as Al and William signs them as Bill.

Many of the men served in the Pacific, but Virgil Cullen’s and Charles Boyle’s letters are the most vivid. Virgil even met General Douglas McArthur while in Australia! Charles signs his letters Buzz.

The war across the Atlantic was fought in many places. Don Hall drove a tank in North Africa and sent pictures and foreign money in his letters. Roy Cleary fought in Sicily and Italy. And Karl Fischer describes what Britain looked like after years of Air Raids.

The finest examples of American pop culture from the 1940s come from William Parizek’s letters while stationed in Virginia. William attended musical concerts and many professional sporting events including the World Series and an NFL game. William signs his letters as Bill.

Read the letters listed here to find great stories on your own!