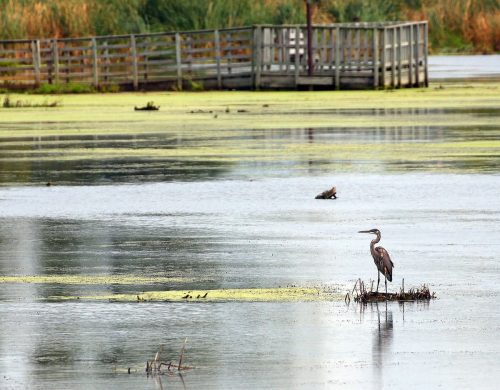 In the 1980s the population of La Crosse and the surrounding area was growing, and so to deal with potential traffic issues, the La Crosse city government introduced an idea to expand the freeway into the city. In the proposal, the La Crosse River Marsh would be filled. This led to the formation of the La Crosse River Marsh Coalition (LCRMC). The LCRMC wanted to spread awareness that a landmark of La Crosse could be taken away and to get the public involved in their fight to save the river marsh from being filled. The LCRMC collection, consists of one box with twenty-two folders filled with newspaper clippings, meeting minutes, surveys, and studies. This finding aid focuses on the fight between the LCRMC and the city of La Crosse over the river marsh, and discuss the potential environmental impacts of filling the marsh. The folders that are selected for the finding aid provide a background into battle between the city of La Crosse and its marsh, as well as the public’s opinion on the matter.

The folders used in this FFA are not in numerical order. Instead they are in this order: background, environmental impact statements, LCRMC’s official position on the marsh, the city’s view, and citizens’ responses through letters to the editor.

Folder 5
This is good starting folder for any historian interested in or wanting to learn everything there is to know about the La Crosse River Marsh! It contains background information from 1841 to the 1990s and provides a great outline for the rest of the collection. There is a general history of the river marsh, a description of past uses of the marsh, and the feelings of the public toward it all in a stapled packet. The title to look for is the “Importance of Wetlands.”

Folder 18
This folder contains a single stapled report. It deals with the public mediator, whose job is to figure out what to do with the land, and if there are any laws being broken. The report outlines the loss of wetlands statewide and the need for the United States Army Corps of Engineers to approve any project. On the pages marked 131 and 132 (there are not this many pages in the folder) there is an outline of the short and long term environmental impacts of filling the marsh. Did the report decide if filling the marsh was positive or negative?

Folder 4
The folder contains the LCRMC pamphlets, The Egret, which were published every couple of months to update citizens on the progress of the potential highway development. The pamphlets provided news, information, and suggestions on how the citizens of La Crosse could get involved in the fight to save the area. There are not a lot (only 6 or 7) pamphlets to read, so read them all. They will reveal the campaign against the city.

Folder 13
Folder thirteen contains notes that were brainstorming ideas to combat the city’s plan to fill the marsh. They are handwritten notes (not in cursive!). Find the first meeting dated November, 1988 and find out what the plans were.

Folder 17
Folder seventeen contains a public survey done by a professor at the University of Wisconsin-La Crosse, who is affiliated with LCRMC. It includes a statement regarding the stance of the organization as well as a summary of the public’s attitudes toward the river marsh. Look for the summary at the beginning of the survey. Read to see how the LCRMC is trying to engage the public in this battle.

Folder 1
This folder has the City Council’s ideas on how to use the La Crosse River Marsh to expand the freeway into the city. Documents in this folder include the specific ideas that city council members have for filling the river marsh in order to get people into the center of La Crosse. The folder also includes notes from the City Council regarding the debate between easier transportation versus preservation. They discuss the benefits and setbacks of filling the marsh. Look to find the voting record of the city council members. Look to determine how closely divided the issue was.

Folder 2
Folder two is really fun to read because it is filled with the opinions that the people of La Crosse expressed on this issue. The folder contains La Crosse Tribune newspaper clippings about public reaction to the highway proposal along with opinions on what should be done to the river marsh. You will find letters to the editor that contain community member opinions. Do most want the marsh to be filled or left alone? The La Crosse Tribune goes through a history of their own reporting on the river marsh as well. Look for the article entitled “The Land No One Can Use.” It’s from back in the 1930s, and gives a representation of what people thought about the marsh back then.

If you want to learn more about the La Crosse River Marsh Coalition go here to check out what can be found in the whole collection!