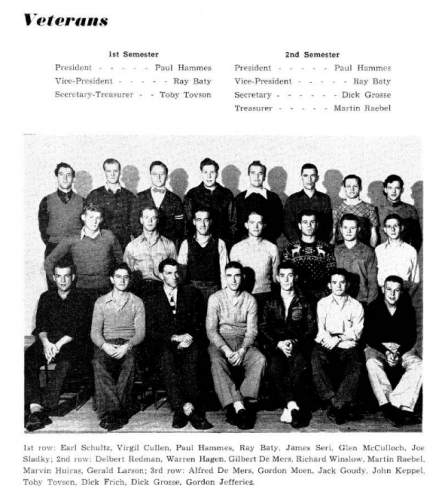 This collection is actually a book. It contains over 50 essays written by veterans involved in World War II. It is a collection of the work done in the English courses of Edgar C. Knowlton, a professor at Wisconsin State Teachers College or modern-day University of Wisconsin- La Crosse. Many of the authors have multiple essays detailing their experiences in the war. Entries contain combat experiences, participation in the army band, factory work in the United States, and rest and relaxation. There is even a discussion of a kind of caste system between officers and their men. The essays were written between 1945 and 1946 and are easily found by title and author in the table of contents. The focus of this Friendly Finding Aid is on the combat experiences of the veterans with an emphasis on the psychological injuries that they sustained during this conflict. It was the topic most frequently written about with approximately 20 entries and references. The Knowlton collection features encounters in both the European and Pacific theatres. They are on sea, land, and in the air because some of the missions involved parachuting out of planes and aerial combat.

All of the essays in this collection are within one book. It is a maroon colored book with the title, “World War II: Veterans Experiences in War”, written on the spine. One reason that there were so many veterans attending UWL after the war was the GI Bill. It was national legislation that gave returning soldiers many different opportunities, including funding to attend school. You can think of the GI Bill as one way that the US government honored veterans for their sacrifices overseas.

Please keep three things in mind as you read these essays:

1. Readers must be aware that the intended audience for these works was only the professor, Dr. Knowlton. The essays were graded, so it is possible that there is information that has been omitted or exaggerated on behalf of scoring higher.
2. As an important note, this collection does not have page numbers! If a quote on page one is referenced, it will be on the first page of that particular essay. Page two occurs on the second, three on the third, and so forth until a new essay begins.
3. This collection contains offensive language, mature themes, and racial slurs as a part of the experience of WWII Veterans. The views within these essays are not those expressed of the creator of the Friendly Finding Aid.

Each description of each essay will note at the end whether the piece is written in cursive, handwritten in print, or typed. Do not fret if you are inexperienced with reading cursive. It does not take very long to become familiar with someone’s writing style. Ask an adult or archivist for help if you find yourself stuck. The essays have been categorized into the European and Pacific theatres.

“Front Line Duty” (Anonymous) This essay describes some American soldiers who are at first eager to see combat but are dismayed as their supply lines are cut off by surrounding German forces. Their prospects look grim as they go three days without food. Read this essay to find out how they survive. (Cursive)

“Paratrooper Delux” (James R. Meyer) This essay describes a pilot and his squad in a glider being shot at by Germans. “When we got ourselves untangled, the Heinies had us “zeroed” and we all were shot at least once getting out of the glider… One fellow said, in a panicky voice, that he had been hit again… I heard Page’s voice say, “Toss me the pilot’s gun, I think that he is dead.” I had been shot through the right arm and back, so I told him, “I’m not dead, Page, but take the damned thing, I can’t use it.”(Page 2) The situation of this writer and his soldiers is quite grim however the existence of his story if true, is proof of his survival. Read the rest of the essay to discover who saves them. (Typed)

“Re-supply” (James R. Meyer) While soldiers fought for different reasons, they were all affected by the horrors of war. Some troops felt terrible seeing their brothers in arms fall in combat, others were desensitized to the violence and felt nothing. Read this essay for a powerful example of how one soldier reacted to combat. (Cursive)

“D Plus Seven” (Ferne Malde) This entry out of the Knowlton collection details the fear of a new weapon that the Germans had developed. It was a rocket, “A bomb with wings and flame spitting from its tail [that] would dive [just] not on military targets but at random, on any person that perchance was in its wake.” (page 1) This essay is a great way to understand the psychological factors of weapons. (Typed)

“My First Day in Combat” (Ted Dusso) After combat for the first time, reality can set in for many soldiers. “We all escaped unscathed and as I sat in my foxhole waiting for the shelling to stop, I thought that combat wasn’t as bad as I had imagined it would be. When, after the next time we were shelled, I found that two of our boys had been killed. I began to think differently. This was not a game anymore, but real war.” (pages 1-2) Read more of this powerful essay. (Cursive)

“The Battle” (Joseph Welland) Soldiers are aboard the USS Brant as their radar picks up signs of a German U-boat (Submarine). Find out how they react. (Typed)

“What’s Troubling You?” (Benjamin B. Walter) This essay gives insight as to the psychological effects of war. A soldier is talking in his sleep and murmuring to himself. His bunkmate asks him about it the next day and responds with a story of a deadly encounter. (Cursive)

“C’Est La Guerre” (Virgil Cullen) This essay describes an assault on a Japanese ammunition dump in which a US artillery soldier gets alarmingly close to the enemy position. The soldier being described in the essay (Stanley R. Richardson) approaches the dump and before he can pull the pin on a grenade, something unexpected happens. (Cursive)

“Captured” (Anonymous) As an American patrol quietly advances on a German position, some soldiers determine they aren’t as fit for war. “Before we even got to the first row of bushes, a shot rang out. One of our boys decided he had had enough and shot himself in the hand.” (page1) As they advance, their company becomes separated and panic ensues. Read this essay to gain a better understanding of how war affects people differently. (Typed)

“Standing-By” (Anonymous) A tense situation escalates as a German U-Boat closes in on an American ship. The American ship is damaged after a direct hit to the engine room. The soldiers prepare to abandon ship but before they can do so, something else happens. (Typed)

“The Trip Back” (Henry J. Lukes) This essay is written from the perspective of a soldier on furlough and enroute home. He discusses his combat experiences in Europe with Mr. Johnson and tells about having to bail out of his plane into enemy territory. Read more to find out how they make it back. (Typed)

“First Taste of Action” (Anonymous) This essay is about soldiers who are met with a surprise attack. One soldier succumbs to the effects of the traumatic experience and is sent back to the Hawaiian Islands. Continue reading to discover how one soldier’s first combat experience was almost his last. (Cursive)

“Baptism” (Richard Frick) This essay takes place in the Pacific Theatre at night off the coast of New Guinea. The soldiers are ambushed by a squad of Japanese planes. The soldier wrote, “It was, as the shrapnel whistled overhead, that I began to be scared rather than excited. It was the fear of death hanging over me that changed things.” (page 2) Read more to learn about the terror of a Japanese ambush. (Typed)

“You Can’t Tell” (Richard Frick) This essay describes an attack on a US ship by Japanese subs. Multiple times, torpedoes narrowly miss the side of the ship. Eventually, the men aboard the US vessel are able to return fire. Read more to discover who ends up sinking. (Typed)

“The First Japanese Plane I Saw Downed” (John Jameson) The soldier being described in this essay boards a ship in February of 1945. Within the first few days, an enemy plane has been sighted and it appears to be going straight for the ship…not slowing down. This student’s essay describes what could have been a kamikaze attack. (Handwritten, print)

“Bennie” (John Jameson) This entry tells a story of an American soldier named Bennie. From the author’s account, it seems as though Bennie was a great guy. The author spends time speaking about his qualities but suddenly there is an attack on their vessel. A Japanese plane divebombs into the side of their ship but something goes wrong and Bennie is missing. (Cursive)