European Migration to La Crosse: The Risks of the Journey 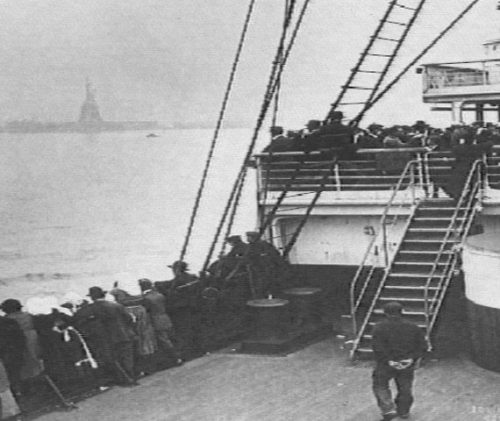 This collection tells the stories of individual European immigrants who came to La Crosse during a time known as the settlement migration era (1850-1890). It features five immigrants who made the brave journey to America and eventually La Crosse. For each immigrant, there were different stages of the journey. First, they had to make the tough decision to leave their familiar homeland, next, survive the hard ship ride across the Atlantic Ocean, and last, settle down in a new area that offered possibilities of a better life. Each of these phases had certain risks and not every experience was the same, so each source in this collection provides unique perspectives.

The people in this collection lived during a time when Europe was dealing with some problems that caused people to set sail for America. People who had already left and settled in America (including in Wisconsin) oftentimes encouraged family, friends, and neighbors to come over too. This collection is about people who left their homes, and others who encouraged family, friends, and former neighbors to come to Wisconsin.

Take Note: This collection was created for the FFA. It is made up of a variety of sources, and each source comes with its own citation!

This collection contains: 1) three letters; 2) the Gundersen Family Book of Letters; and 3) a published registry of La Crosse from 1854. The single letters and the book of letters are all kept at the La Crosse Public Library Archives in La Crosse. Each source at the La Crosse Public Library Archives is in its own individual folder with the call numbers provided to you. The registry, however, is part of Murphy Library’s Digital Collections and is accessible at all times, but you may need to ask a librarian or your teacher for a password. You can find the online registry by searching the name “Spencer Carr” in the database. Everything is typed, translated, and easy to read. Lucky you!

Frank Huebsch’s Letter
Frank Huebsch was a German immigrant who came to La Crosse in July of 1855. His very interesting four-page letter is to his parents and family back in Europe to tell them where he is, what he is doing, and about his journey. In it he encourages them to come over and join him, but he also honestly tells them about how hard the journey was. He describes the conditions on the ship and details of La Crosse and his job. He signs his letter as “Franz,” which means that he probably changed his name to Frank when he came to America. He also calls La Crosse “Prari [sic] La Crosse,” which was the town’s name back then. Frank’s letter is fun to read, and you will learn a lot about him! Can you guess what his job was in La Crosse?

S.W. Taylor’s Letter
S.W. Taylor might have been an Italian immigrant. His two-page letter is from 1852 and is written to a person he calls H.H. Taylor. The purpose of the letter is to persuade H.H. Taylor to come to La Crosse as soon as possible. In it he describes the work and land that is available as well as his own plans for success. As you read note the sense of urgency. This is because many people were already arriving and taking land. This letter might be a little confusing at first because S.W. only includes nicknames and abbreviations for people’s names. Similarly, he says the name of a city without the state or country. For example, he mentions the city of Genoa, which is an Italian port city. This probably means that S.W.’s homeland was Italy. Read this letter to understand the urgency felt by many migrants. Do you think you would have been persuaded to come to La Crosse by S.W. Taylor?

Michael Rentz’s Letter
Michael Rentz was a Norwegian immigrant who left his homeland in Esofea, Norway in April of 1868. He eventually settled in Vernon County, Wisconsin. In his letter he describes his experience on the ship while crossing the Atlantic Ocean. He gives many details of storms, damage, layovers, sickness, and more. His ship sailed to a port in Quebec, which was not very common. Many immigrants sailed to New York. His letter explains how Quebec created difficulties for him. Be aware! Rentz uses some strange and outdated word choices. For example, he talks about “unwelcome guests,” which he calls “gray-backs.” He was probably talking about rats, mice, or body louse, all of which would have been common on the old and cramped ships. Read this letter to find out more about what it was like being on the old ships that crossed the Atlantic! Would you have done it?

The Gundersen Family Book of Letters is a book of correspondence with dates that range from April 16, 1894 to December 17, 1939. The book contains typed and translated letters with pictures of the originals so you can see what Norwegian writing looks like! It includes five letters written by Adolf himself, but the majority are from his friends and colleagues. For this collection you can focus on just the five letters written by Adolf. They are from April 16, 1894 to September 8, 1894. These letters appear first in the book.

Adolf Gundersen was a Norwegian immigrant doctor who moved to La Crosse in 1891 to begin a practice with his friend, Christian Christensen. He eventually helped to establish the present-day Gundersen Health System! His letters are written to his brother, Gunnar, who was back in Norway. He talks about life in La Crosse, the weather, and his medical work. Some letters have missing parts, and some of the medical words can look scary, but these letters are very interesting! Read them to learn more about this famous man. He was a funny guy!

Spencer Carr was a Baptist church Reverend who in 1854 wrote a detailed description of the area. He did this to persuade migrants to come west and settle in La Crosse. His registry – a registry is a book – begins with a story-like essay written by Carr, and is followed by a list of every single person who lived in La Crosse in 1854! It includes everyone’s name, religion, occupation, and birthplace. If you look through this registry you will be able to picture what La Crosse was like over one hundred years ago!

Reverend Carr’s registry explains almost everything you might want to know about the area, including the landscape and opportunities (such as farming and trading along the Mississippi). As you look though his essay and registry see if you can find any familiar incentives to come to La Crosse?

Howard Fredricks conducted an oral history with Adolf Gunderson in 1992 that can also be found in the Murphy Library Area Research Center. If you wanted to know more about Gunderson’s life in La Crosse and his family’s connections to the clinic ask your archivist for this oral history!