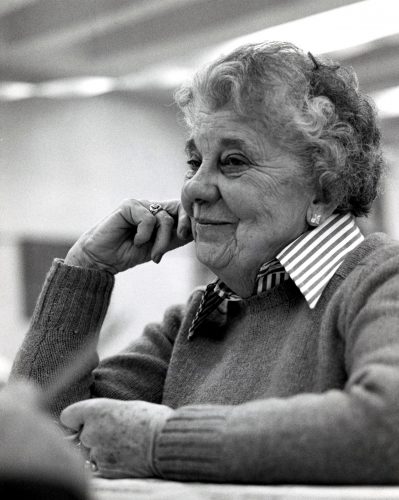 These two interviews are part of a seminar paper written by a UWL graduate student. This means that as a whole, “Edith J. Cartwright: A Dean among Deans,” is a secondary source. It is a research paper about Cartwright, who was the UWL Dean of Women from 1941-1969. (At this time, UWL was called “Wisconsin State University, La Crosse.”) The author, Patricia A. Mertens, interviewed Cartwright as a part of her research, and Appendix A in the thesis is a transcription of two interviews she had with Cartwright.  The interviews are both primary sources. This finding aid focuses on only these interviews.

You can find the interviews on pages 31-55 of Mertens’ paper, “Edith J. Cartwright: A Dean among Deans.” The first interview (pgs. 31-46) includes just Mertens and Cartwright, but the second one (pgs. 47-55) also features Maurice Graff (previously UWL Vice President) and Dr. Robert Steuck (former UWL Assistant to the President and Dean of Men). The interviews were conducted in December 1970. There is no known audio of these interviews, however they are typed and easy to read.

Mertens’ seminar paper is also a great source.  In it she argues that Cartwright was important to the La Crosse community and UWL campus, gives a detailed biography of Cartwright, and explains what UWL was like in the early years. (In the 1920s, Cartwright got her college degree from UWL in Physical Education, so Cartwright experienced UWL as a student and a faculty member.) In the paper, Merten gives Cartwright credit for increasing female enrollment and improving women’s college experience during her years as Dean of Women.

Pages 31-35 review the early years of Cartwright’s career as Dean of Women at UWL, beginning in 1941. This includes the story of Cartwright’s education and how she got the position. In addition, the two discuss differences between student life in 1941 compared to 1970 in regards to rules about smoking, drinking, living off campus, women’s dress, and more.  (By the way, UWL didn’t have any dorms in 1941!)

Pages 35-42 highlight specific events and topics important to Cartwright as Dean of Women, such as the Women’s Self Government Association (WSGA) and sororities. At one point Mertens asks about the close relationship Cartwright had with many students – both women and men – which leads to a conversation about the “town-gown” relationship in La Crosse. (This term simply means the relationship between the La Crosse community and the university campus.) In addition, Cartwright talks about UWL’s nationally recognized Physical Education Department, campus housing, and Cartwright’s role in getting women’s housing on campus in 1951. Cartwright tracked the story of how residence halls on campus changed as more women came to school at UWL.

Pages 43-46 cover Cartwright’s roles developing the UWL student Union and the Cartwright Center (built in 1959). She talks about what it was like working with Dean Graff, Dr. Cowley, Dean Gunning, and President Mitchell while planning the Center.

“A Conversation with Miss Cartwright and Associates,” pg. 47-56

Pages 47-51 cover Cartwright’s relationship with her co-workers. She worked very closely with Vice President Maurice Graff from 1941 to 1970. Graff shares his first impressions and some early memories of Cartwright. In return, Cartwright tells her first impressions of Graff. Mertens asked Robert Steuck (previous Dean of Men) to do the same. They also discuss their roles setting up the UWL campus to be what it is today.

On pages 51-55 all three talk about the planning of the new student union, the Cartwright Center. Graff also tells a story about a time when in the 1940s, there were only three phones on the whole campus! Steuk also discusses Cartwright’s statewide fame.