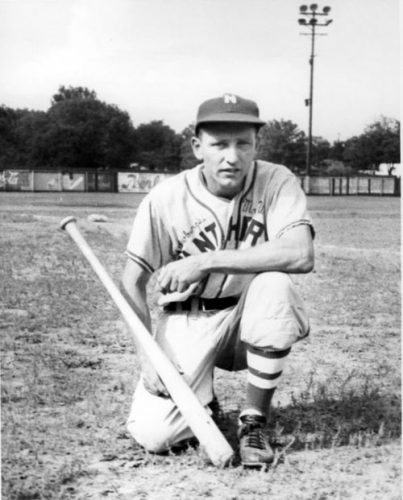 This collection was put together by none other than La Crosse’s Mr. Baseball himself, William J. “Boober” Parizek. He was a man who knew everything about the Coulee region’s baseball history. He had personal connections to locally famous ball players and collected any document, newspaper clipping, or audio tape on the subject. Parizek was a long-time resident of the area and graduated from Central High School in 1938 where he played baseball and softball.

The William J. Parizek Papers span 1887 to 2006 and are a great collection about the history of baseball and other sports in La Crosse, Wisconsin. It is one box containing 62 folders! This finding aid, however, focuses on a small selection of the folders all dealing with baseball’s impact on the development and growth in the city and the region.

The game of baseball represents the history and identity of La Crosse and America as a whole. Its popularity as a leisure activity has brought in businesses and created local heroes. Without baseball, La Crosse would not be the city it is today!

William J. Parizek (“Mr. Baseball”)
These two folders contain all kinds of interesting baseball materials that William J. Parizek saved over the years. They are not in any particular order, and I highlight just a few things within them. Go through the whole folder and I promise you that you’ll understand why Parizek had the nickname “Mr. Baseball”!

Folder 39 contains notes written by “Mr. Baseball”. There is a booklet filled with team photos, names of players from different teams, and a brief history of softball in La Crosse during the summer of 1920. Parizek was very involved with a lot of teams from different leagues, and you will see that he is found in some of these collections. You will have no trouble finding him. For example, take a look at the 1954 rosters of the La Crosse 12-inch fast-pitch Classic League. You will find that he played for the Causeway Beer Depot! He also played for the 1956 Wettsteins Softball team, as well as the 1958 Men’s Wear Baseball team. He then went on to coach numerous teams, including the La Crosse Legion team in 1964.

Folder 41B has a few newspaper articles about Parizek, along with photos of him. All of the newspaper articles honor him, including one that was written about him while he was playing for the Causeway Beer Depot Softball team. Find the one from June 17, 1953. That was “Boober Parizek Night!” The photos included in this folder show some of the teams that he played for, and there is even a stand-alone picture of him holding his bat in a Newburg uniform from 1958.

This collection of folders shows how baseball was widespread throughout La Crosse since there were SIXTEEN baseball teams spanning from the mid-1800s up until 2006.

Folders 11-12, 16, and 26-38 contain descriptions of these teams and their players, newspaper articles, and photos of various teams that span over a century (1886-1985) in the La Crosse area! The teams’ names are a great insight to local businesses and organizations. Some examples include the Boosters (Booster Club of La Crosse), Clothing Co. team (North Side Nelson Clothing Company), News Company (junior league team), and the Fords (Dahl Automotive). There are even some folders that include game stats and lineups! For example, folder 32 includes the lineup of the 1909 La Crosse Outcasts and their final league standings.

Edward Konetchy and the Hall of Fame

“La Crosse has often been called the ‘hotbed of baseball’ in the Coulee Region” because well-known baseball players, such as Burleigh Grimes, the man who threw the spitball, and Leroy “Satchel” Paige, the greatest African-American pitcher of all time, played at the Copeland Park baseball diamond. However, La Crosse has some famous people of its own.

Edward Konetchy, for example, was a hometown baseball legend who from 1907-1921, played in the Major Leagues for teams such as the St. Louis Cardinals and Pittsburgh Pirates. He was even inducted into the Wisconsin Hall of Fame! His induction was celebrated with a banquet, which took place in 1962 and was hosted by the chairman of Oktoberfest. In addition, these folders contain his salaries as a ballplayer from La Crosse to his last days in the MLB.

Folder 20 has a description of the banquet. Page three of this description, which is from the Editor’s Tribune, references Konetchy’s amazing baseball achievements. Some of them include topping the National League in fielding for seven consecutive years, playing in the longest game in MLB history, and hitting 41 homeruns as a 40 year old!

Folder 21 has complete recordings (reel-to-reel and digital) of Konetchy’s 1962 Wisconsin Hall of Fame banquet that was held in La Crosse. All together the recordings are about 45 minutes, and they introduce a number of people who were involved with the banquet. Most of them had an impact on Wisconsin baseball in some form. One of the people was the announcer for the Milwaukee Braves at the time, my grandpa Earl Gillespie! (Digging in the archives can be very rewarding!) Also, there are photos from Konetchy’s Wisconsin Hall of Fame banquet.