B.F. Heuston: Working Across Racial Lines During the Civil War 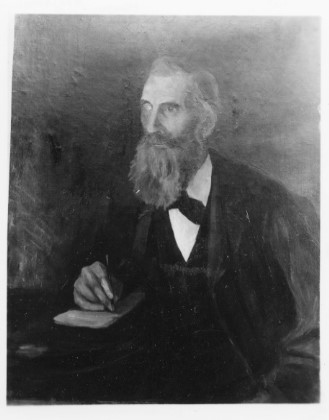 This collection covers the life of Benjamin Franklin Heuston (B.F. Heuston) who accomplished a great number of things in his life. He was one of the first settlers in Trempealeau County, a businessman, county official, and a soldier who fought in the Civil War. (He was in Company C in the 22nd Wisconsin Volunteer Infantry Regiment.) The collection contains two boxes, about half of which, deal with his time in the Civil War. It includes close to 100 hand-written letters to his wife, detailing his everyday experiences traveling and fighting. A small number of these letters also include debates about Negro soldiers. (The word Negro is an old-fashioned, and at the time polite, word for African American.) The letters follow B.F. Heuston through the many cities he marched to during the war, and how he retraced Sherman’s March to the Sea! Some of these letters also give insight on Heuston’s thoughts about abolition, such as the issues he faced when the Union started enlisting and arming African American soldiers, and his opinion when his officers refused to return slaves to southern slave owners. The letters also discuss the conditions of war hospitals, since Heuston was hospitalized twice.  A good majority of the letters also deal with making sure his family is safely taken care of back home. In addition to the letters, Heuston also kept a war journal, where he would keep track of the places and distances he traveled, as well as the landscape and weather. Lastly, the collection includes a paper Heuston wrote titled “The Negro Problem.” In it he gives his experiences with African American’s before and during the war.

This Friendly Finding Aid will touch on B.F. Heuston’s life during the Civil War, but focus on the debates and issues he witnessed with African Americans. It will cover the day-to-day life of a Union soldier and issues surrounding African Americans as soldiers and eventually as free people. It will also cover how Heuston thought African Americans should be treated, and if they should be armed. Finally, it covers the viewpoint of a Northern soldier witnessing slavery.

This collection has a lot of materials in it for only being two boxes, however, only documents that pertain to B.F. Heuston’s time during the Civil War appear below. These include several dated folders of correspondence to his wife, his war journal, and several miscellaneous notes. This may not sound like a lot compared to other collections but this one is full of great information that tells many different and interesting stories.

All letters listed below feature B.F Heustons interactions and views on African American, soldiers and civilians. Find the letter by date. It is normally at the top. All letters are handwritten and in cursive, so reading them may take some time to get used to, but after a short while you’ll be able to figure out his handwriting and understand what Heuston is saying. All letters are located in box 1. They are in folders marked as correspondence, and are separated by dates.

This is the first of multiple letters Heuston wrote that touch on the topic of African American soldiers in the war. As you read notice what the he says in the letter about new government polices involving Negros as soldiers, and a special policy involving the newly founded state of West Virginia.

This letter is another one that shows Heuston’s views on Negro soldiers. He brings up an interesting and odd theory on why he thinks African Americans would be better at fighting in the South than White soldiers. Heuston then gives his reasoning as to why they should fight in the war and how it would be  “good” for African Americans to “earn their freedom.” After reading, consider whether Heuston’s racial attitudes were unusual or in the majority at the time?

In the letter dated August 20, notice that Heuston has made a request to be promoted to officer of a new unit of men. He later goes on, in his letter from August 24, to tell his wife his reasons for requesting such an appointment. Read these letters to try to find out exactly what Heuston requested and why.

While telling his wife about life stuck at camp, Heuston wrote about a very interesting activity that he had been doing in this free time. Having been a teacher before the war, Heuston visited and taught at a Negro school. Read more of this letter to learn about his experiences there. See if you can find out what he thinks about these students.

Notice that Heuston begins this letter talking about home life. However, as you continue to read you will see that a commander in the Negro Army has sent a special request for Heuston to become an officer of Negro soldiers. Heuston is unsure if he’ll be able to fulfill this request. Read more to find out why Heuston doesn’t think he’ll be able to do it.

Notice while reading this letter that Heuston is in the hospital resting his wounds. As you read further note that he has a friend who is an officer the in the 17th Colored Regiment who offers Heuston an interesting job if he is discharged. As you keep reading try to find Heuston’s thoughts about leaving the war and where he believes he will end up.

As you read this letter, get a sense of all the moving that Heuston had been doing as a soldier. Be sure to read the part of the letter where Heuston brings up the question, “What shall we do with the Negros after the war?” Then read what Heuston thinks should be done and why, in his opinion, he considers his solution good for African Americans.

Most of the materials in this folder are miscellaneous articles and papers. It includes a series of papers on Temperance and Prohibition. At the very front of the folder is a paper written by Heuston tilted, “The Negro Problem.” In this paper, he gives a general history of African Americans, his experiences with African Americans, and what he called “the Negro problem.” This is some of the most interesting writing that Heuston does throughout the whole collection! He tells amazing prewar experiences that are very unusual for a White Midwesterner. If you want to skip Heuston’s history of African Americans start on page seven to get right to his experiences.

The original handwritten war journals are located in Box 2 (volumes 15, 16, 17, and 18).
Here are the typed war journals located in the folder marked Transcription of War Journals.

In B.F. Heuston’s journals he mainly writes brief sentences of where he was that day, how many miles he marched, and what the landscape looked like. He would occasionally tell details of an event that happened that day such when he visited a Negro school, or traveled on a steamboat and took on bullets from across the river. As you go through Heustons letters it would be a great idea to check with the dates in his journal to get a better understanding of what is happening with Heuston at that time.

If you are interested in learning about B.F. Hueston’s other experiences during the Civil War: such as some of his missions, his medical treatment at war hospitals, and all his travels throughout the war, take a look at these letters listed below along with the folder they are located in. They are all located in box 1.