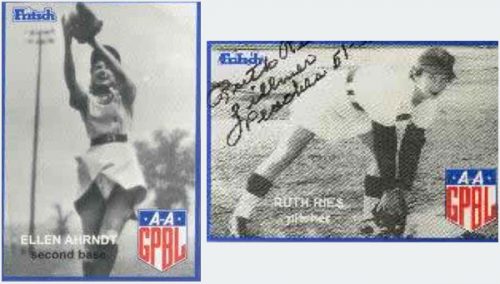 From 1943-1954 America had its first women’s professional baseball league, the All American Girls Professional Baseball League (AAGPBL). Chicago Cubs owner Philip K. Wrigley – yes, the chewing gum guy – created the league to keep the American pastime alive throughout WWII when a majority of the top male baseball players joined the war effort to serve their country. The first four teams formed in 1943 with 64 women, but eventually that number would grow to many more teams and over 550 female players!

This collection includes oral history interviews of two women who played in the AAGPBL, Ellen (Ahrndt) Proefrock and Ruth (Ries) Zillmer. Oral histories are recorded interviews with people who have personal knowledge of past events. In these interviews the former players cover topics related to their personal life as well as what life was like as a player in the league. Both women answer questions about subjects like uniforms, social expectations, tryouts, practice, and life on the road. They also address issues related to WWII such as the role of women in the workforce, gender roles, and public opinion of women’s sports during this time.

The histories are .wav format on a CD and can be listened to with any audio program such as iTunes or Windows Media Player. The quality is good so you can understand everything being said, but there is not a transcript so you must take your own notes for direct quotes. Also, the interviews are not very long so they are easy to listen to in their entirety, but if you’d like, you can use the times provided below to easily jump to a section you’re most interested in.

Ellen (Ahrndt) Proefrock played second base for the South Bend Blue Sox in 1944. This interview talks about her experience in the league.

Personal History (1:13-9:34) – In this section learn about Ellen’s life on the family farm and her early years playing baseball. At one point she recalls how her dad built a baseball field on their farm and all the community kids would come there to play.

Life playing in the All American Girls Professional Baseball League (9:34-29:55) – During this part of the interview Ellen talks about her daily life while a part of the league. She discusses the players’ uniforms – they wore skirts – and attending “Charm School” as a part of her baseball training. Ellen also talks about practice, player salaries, bus trips, and having to live with another family during the baseball season.

Opinions (29:55-27:15) – Near the end of WWII the men started to come back and so many of the “girl” teams were disbanded. In this section Ellen gives her opinions of the legacy and the end of the AAGPBL.

WWII (37:15-44:51) – During the war women took on many new gender roles, including playing baseball. In this part of the interview Ellen talks about women in the workforce, why the AAGPBL was formed and women’s liberation after the war.

Ruth (Ries) Zillmer was a pitcher for the Rockford Peaches from 1951-1952. In this interview she recalls what life was like playing in the All American Girls Professional Baseball League.

Personal History (00:40-8:47)  – Ruth was born in Illinois before moving to a farm in Wearworth, Wisconsin, when she was 12 years old. In this section Ruth talks about growing up playing catch with her brother, and on various country school teams. Ruth played on a traveling team organized by the girls at her high school!

Life playing in the AAGPBL (8:47-22:31) – Ruth was a pitcher for the Rockford Peaches.  In this section she talks about the team manager, William Allington, and learning how to properly slide into base while wearing a skirt.  Ruth also discusses social expectations, uniforms, and tryouts.

WWII (22:31-31:27) – The 1940s was the time that “Rosie the Riveter” was telling women that they were needed in factories but after the war women were expected to return to their traditional gender roles in the home. In this section of the interview Ruth talks about the difference between the early years of the war and league and the later years when she played. She also talks about what girl’s athletics were like during this time including basketball, which was played only half court and with no dribbling.

Life after the AAGPBL (31:27-48:18) – The league officially ended in 1954 after only 6 teams remained. In this part Ruth talks about returning to school, getting married, and her continued interest and involvement in baseball. During this last section Ruth also talks about the Hall of Fame Induction, player reunions, and the legacy of the league.

Clement C. GrawOzburn does several other interviews with other players in the league. These oral histories are also available at the University of Wisconsin La Crosse Special Collections;

Jacqueline was the catcher for the Springfield Sallies and Kenosha Comets from 1950-1951. In this interview she talks about many topics including her personal history, life in the AAGPBL, players, and managers.

Dolly was one of the youngest players signed by the AAGPBL. She was 13 years old in training camp and played for the Fort Wayne Daisies. She also played on the All-American All-Stars, which was a traveling team formed after the AAGPBL folded. Her interview discusses topics such as her personal history, experiences playing in the league, and playing for the traveling team. Dolly currently lives in La Crosse!

Annastasia “Stash” Batikis was a center fielder with the Racine Belles of the All-American Girls Professional Baseball League for a single season in 1945. In this interview she talks about her personal history, different aspects of the league, and players.

Louise “Lou” Sauer was a member of two champion teams (Rockford Peaches and Racine Belles) and was on the All-Star team two times. Her interview discusses topics such as her personal history, her opinions about and experiences in the league, and players.

Mary signed with the South bend Blue Sox in 1951 and played with them through 1954 when the league disbanded. In this interview she talks about her personal history, differences between softball and baseball, life in the league, her opinions on playing, and the league’s legacy.