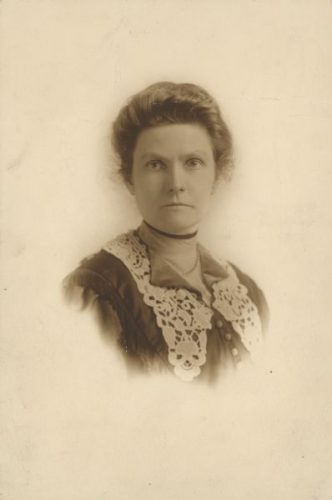 Ada James was a woman’s suffrage leader in Wisconsin who led the Political Equality League from 1910 to 1912, and served as the executive secretary of the Wisconsin Woman’s Suffrage Association, or WWSA, from 1912 to 1915. In these leadership roles she toured around the state promoting small town grassroots suffrage organizations through speeches, leaflets, and other pro-suffrage publications. She also fought against the strong anti-suffrage presence in Wisconsin by exposing how Wisconsin breweries were using their money to bribe and win the votes of the Wisconsin legislature.

After stepping down from her leadership role in the WWSA in 1915, Ada turned her attention to more radical forms of suffrage activism like picketing the White House and civil disobedience. This was the same kind of activism used by nationally known suffragettes like Alice Paul and the members of the National Women’s Party. She supported these efforts by lobbying Wisconsin and important swing state congress members in 1917 and 1918 to vote for a national amendment to grant women the right to vote. Her lobbying was a very radical form of activism because it meant that Ada was talking directly to the congress members from each state, rather than the community in which the members served. This hard work and organizing paid off when Wisconsin became the first state to ratify the 19th amendment. This was an amazing accomplishment because the Wisconsin legislature had denied a suffrage amendment just a few years earlier in 1912.

This collection is made up of 30 boxes, but the only boxes that you will focus on are 18, 19, 20 and 24, which demonstrate the radicalization of Ada and the Wisconsin suffrage movement between 1912 and 1919. One of the best parts about this collection is that it is available online through the University of Wisconsin-Madison archives. This means that you can dive into Ada’s story at any time, whether it be at home, in your classroom, or at a library. In order to access the digital collection do the following:

Most of the letters in Ada’s collection are written in cursive, which may seem scary. However, once you start reading the collection you will get used to the cursive handwriting quickly. You will even be able to tell who wrote some of the letters just based purely off their style! By the end of your time with this project, reading the cursive will be one of the best parts of the collection because the unique handwriting of each suffragette gives the documents character, distinguishing them from type-written documents.

If you want to read, feel, and connect with the documents that Ada and other famous suffragettes like Alice Paul wrote in person, ask your teacher to get in contact with the Area Research Center found at the nearest UW campus. Interacting with the letters online is enjoyable, but there is nothing like seeing the real thing… it can even be life changing!

To get the collection do the following:

In this folder pay special attention to the letters between Ada and Lutie Stearns because they are the presidents of the Political Equality League and Wisconsin Woman’s Suffrage Association. These letters also suggest a merger between the organizations. In particular find the letters all dated January 7, 1913 to Ada from Lutie Stearns, Ms. Shaw, and Crystal Benedict. These letters show support for and opposition to the merger. As you read, ask yourself what did Stearns and Ada hope to accomplish with this merger?

The Old Ways of Suffrage Organization

Look at the pamphlets and copied letters from June 5, 1913 for examples of how the state suffrage organizations helped support and strengthen local organizations. Find the March 29, 1913 letter between Ada and Theodora Youmans, the president of the WWSA. Also, look for letters between these same women between June 4 and June 13 as well. These letters detail the logistics of the WWSA. Look for propaganda and specific details about where pro-suffrage documents are being sent and how they are used.

This folder of details the strategies of the National Woman’s Suffrage Association (NWSA) by including letters that discuss sending suffragettes to represent Wisconsin at the Suffrage march in Washington D.C in March,1913. The letters between Ada and Mrs. Palma Pederson from February 1, 1913 and the meeting minutes from the joint suffrage convention on February 4, 1913 are two of the key documents in the folder. The letters dating between March 20 and March 24, 1913 are also important documents because they explain the NWSA’s tactics. Pay attention to the emphasis put on open-air speeches and suffrage education within local communities by the NWSA.

The Shift to Radical Thought

This is a very rich folder because there are a number of important letters to find!

Again, pay attention to the letters between Ada and Theodora Youmans from January 26 through February 7, 1914 because these letters detail how the Wisconsin suffrage movement went about building a strong enough voice to propose a second state amendment before the legislature following the first one’s failure in 1912.

Find the letters between Ada and Crystal Benedict. They are dated March 14 and March 25, 1914. Benedict writes to Ada on how much public support the possible amendment has.

Lastly, look at the letter to Ada from Alice Paul from February 6, 1914 because this letter marks a shift in her perception of suffrage organization towards radically fighting for a federal amendment. Read to find what Paul considered radical and on the tactics in which Ada agreed with Paul.

Find letters between Ada and Alice Paul from June 27 and June 28. Notice that there is a shift in the organizational tone.

The letters addressed to Ada from Alice Curtis all dated August 8, 1915 are also key letters as Curtis asks for Ada’s advice on how to properly organize conventions and public speaking events.

Find the letters dated between June 19 and June 25, 1915 between Ada and Theodora Youmans, who was the president of the WWSA at the time. In these letters, note what parts of Youmans’s agenda Ada supports and rejects regarding Alice Paul’s congressional union.

Find the list of tactics used by suffragettes sent to Ada all from October 12, 1915. Also read a few letters from October 12, 1915. What connection do you see between the tactics used and the attitudes towards those tactics and the suffrage movement. The brochures in this folder all dated November 4, 1915 provide a key understanding into how suffrage literature was written and what they were arguing for.

The Eyes of Suffragettes Fall on Washington D.C.

These letters to Ada from February 12 to February 19 detail a change in the Wisconsin Woman’s Suffrage Association (WWSA). Read these to look for the shift that occurs with Ada and the other members of the WWSA. Take note of the states that they turned their attention to.

The Final Push to Ratify the 19th Amendment

There are two important letters to find in this folder. First, find the January 10, 1918 letter between Ada and Congressmen John Shack, which demonstrates how lobbying helped gain support locally as well as nationally. Find the reason why the Congressman could not vote to pass the 19th amendment. Do you believe him? Do you think Ada believes him? Also find letters between Ada and Alice Paul all dated January 24, 1918. Note the sense of urgency between the two women. Why do you think it is present?